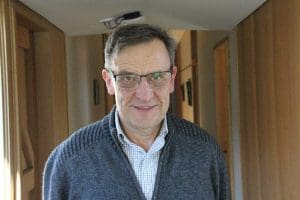 The WR ASBV uses an improved method to calculate the predicted number of lambs weaned per ewes joined for maternal and Merino animals.

“We then balanced these three components to produce the Weaning Rate breeding value, which describes how many lambs a ram’s daughter will wean.”

Animal Genetics and Breeding Unit principal scientist, Andrew Swan, led the development of the value and said the new method will provide improved analysis and information to drive better genetic gains for producers.

“WR will provide more transparent information to producers because it provides a net overall reproduction breeding value derived directly from the component traits.

“With NLW, trait values can be the result of any one of the components – for example, a value of zero lambs weaned could occur because the ewe didn’t conceive at all in the first place, or because she had one or two lambs but none of them survived to weaning,” he said.

“However, with the new reproduction analysis, ram breeders can focus on the three component traits separately to increase genetic gain and maximise reproduction, while the new weaning rate ASBV complements this as a simple tool for ram buyers to use in their purchasing decisions.

“Breeders can have more confidence that it’s accurate and the results are more detailed.”

How to use the new WR ASBV

Ms McCrabb said maternal and Merino sheep producers should keep an eye out for the new WR value when purchasing sires in the upcoming sales.

“WR is not only an ASBV but it’s now included in our selection indexes for maternal and Merino breeds.

“For maternal and Merino ram buyers turning up on sale day, keep in mind WR will be in the catalogue instead of NLW and looks a bit different – while NLW used to be expressed as a percentage, WR is presented as a decimal and is expressed in the units of lambs,” she said.

“It’s an adjustment for producers, but it’s an improved model and it uses breeders’ data in a more accurate, detailed way.”