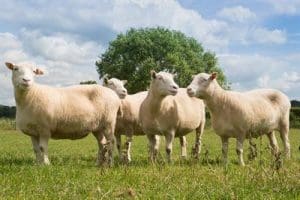 The team, who published last year’s Nottingham Dollies research which showed that the eight year-old Nottingham ‘Dollies’ had aged normally, have now published a radiographic assessment of the skeletons of Dolly herself.

They also published assessments of Dolly’s naturally conceived daughter Bonnie and of Megan and Morag, the first two animals to be cloned from differentiated cells.

Their findings – ‘Radiographic assessment of the skeletons of Dolly and other clones finds no abnormal osteoarthritis’ – have been published in the online journal Scientific Reports. They show that the skeletons, stored in the collections of National Museums Scotland in Edinburgh, bear radiographic OA similar to that observed in naturally conceived sheep and Nottingham’s healthy aged clones.

Professor of Developmental Biology in the School of Biosciences, Kevin Sinclair said the findings of last year appeared to be at odds with original concerns surrounding the nature and extent of osteoarthritis in Dolly – who was perceived to have aged prematurely.

“Yet no formal, comprehensive assessment of osteoarthritis in Dolly was ever undertaken.

“We therefore felt it necessary to set the record straight.”

The four Nottingham ‘Dollies’ – Debbie, Denise, Dianna and Daisy – were derived from the cell line that gave rise to Dolly. They originated from studies undertaken by Professor Keith Campbell between 2005 and 2007 which sought to improve the efficiency of somatic-cell nuclear transfer (SCNT). The Dollies were his legacy to the University of Nottingham.

Professor Sinclair, with Sandra Corr, Professor of Small Animal Orthopaedic Surgery (who has since moved to Glasgow University), and David Gardner, Professor of Physiology at Nottingham’s School of Veterinary Medicine and Science, carried out the study into Nottingham’s Dollies.

They concluded that the Nottingham Dollies had aged normally with no clinical signs of OA. They had radiographic evidence of only mild or, in one case, moderate OA.

Their results, published July last year in the academic journal Nature Communications, were in apparent stark contrast to Dolly the Sheep’s diagnosis of early onset OA which led to scientific concern and media debate over the possibility of early-onset- age-related diseases in cloned animals.

Reports in 2003 that Dolly, the first animal cloned from adult cells, was suffering from osteoarthritis at the age of 5.5 years led to considerable scientific concern and media debate over the possibility of early-onset age-related diseases in cloned animals.

However, the only formal record of OA in the original Dolly was a brief mention in a conference abstract which reported that Dolly had OA of the left knee. In the absence of the original records the Nottingham team decided to take to the road and find out for themselves whether the concerns were justified.

They travelled to Edinburgh and, with special permission from Dr Andrew Kitchener, Principal Curator of Vertebrates at National Museums Scotland, undertook radiographic examinations of the skeletons of Dolly and her contemporary clones.

“We found that the prevalence and distribution of radiographic-OA was similar to that observed in naturally conceived sheep, and our healthy aged cloned sheep,” Professor Corr said.

“As a result we conclude that the original concerns that cloning had caused early-onset OA in Dolly were unfounded.”

Commercially-run sheep are rarely kept beyond the age of 6-7 years and their natural life expectancy rarely extends beyond 9-10 years. The Nottingham Dollies, who would now be over 10 years of age, have been humanely euthanised, but their legacy continues. Professor Sinclair and his team are currently undertaking detailed molecular studies to gain a greater insight into the ageing process.