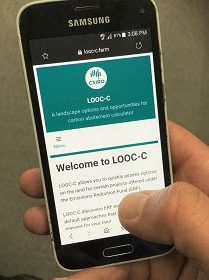 Check out your carbon options on the LOOC-C app.

SHEEP, beef and crop farmers now have an app to help them understand their potential opportunities from carbon-reducing activities.

Australia’s national science agency CSIRO has developed the LOOC-C (‘Look See’) app to give farmers detailed assessments of how their land and farming practices could be eligible for rebates under the Climate Solutions Fund (CSF).

The newest update of the app now includes measurement of soil carbon and beef cattle herd management and comes as the latest ABARES Insights paper indicates Australia’s farmers are well placed to benefit from global market changes as countries and businesses around the world act on and adapt to climate change.

CSIRO has also developed a digital service allowing access to the app’s data streams for ag-tech companies and carbon service providers to add value to their products and services.

Sheep Central has been told there are no plans to include a specific measurement for sheep farmers on the LOOC-C app, but Farmers For Climate Action chairman Charlie Prell said this was no reason to question the app’s validity for sheep producers.

“Sheep farmers will be able to use the app to access the potential of carbon credits for soil carbon.

“Cattle are “included” because of their methane emissions, which sheep don’t need to worry about,” he said.

The app gives estimates of abatement quantity for CSF methods in Australian Carbon Credit Units for specific land areas, like a paddock, and is consistent with the latest version of the National Carbon Accounting Model, which is used to estimate land sector carbon emissions. This means LOOC-C users have access to the most up to date carbon estimates available, at the touch of a button, CSIRO said.

CSIRO’s LOOC-C project leader, Peter Fitch, said the aim of the tool is to help farmers and land managers participate profitably in greenhouse gas mitigation and maximise the benefits to the land from carbon markets.

“LOOC-C is unique and the quickest way of finding out what carbon farming options are available for your farm, what you’re eligible for and what the benefits might be.

“We see it as a high-tech conversation starter that enables farmers to undertake a preliminary assessment of options and connect them with a suitable next step for their carbon farming journey,” he said.

“This app is an example of what the industry needs at the moment, allowing opportunities in the carbon market to be explored simply and without obligation.

“You can tell that the development of the app included input from both landholders and project developers, it’s great to see these types of products coming from CSIRO,” she said.

The Queensland Government has been using the app as part of the roll out of its Land Restoration Fund. CSIRO said carbon farming is a way for landholders to help reduce national carbon emissions by capturing and holding carbon in their plants and soil, generate environmental and on-farm benefits, and get paid for it. Examples can include planting trees, retaining vegetation rather than clearing it for cropping, reducing soil tillage or improving pasture for livestock.

The app can be accessed here.

ABARES this week released its latest Insights paper: Analysis of global responses to climate change: opportunities for Australian agricultural producers, which outlines how the sector could prosper provided key technologies are realised, and trade rules are evidence-based.

“Some of Australia’s trading partners, like the European Union, are now exploring options to develop trade rules to deal with the emissions intensity of imported products.

“So while competitive pressure will grow, it’s important to acknowledge that our meat and cropping sectors are relatively less emissions-intensive than some other major exporters,” he said.

“And these sectors are constantly innovating, with several technologies now in the pipeline offering the chance to decouple emissions from production.

“For example, products are now being tested to reduce methane emissions from livestock, the largest source of Australia’s agricultural emissions,” Dr Greenville said.

“Reducing emissions also tends to increase productivity in agriculture, which will be critical in counter-balancing the impacts of climate change.

“If done right, technology and trade rules have the potential to support industry’s goals of higher returns and environmental sustainability,” he said.

“However, we must ensure that trade rules developed overseas are evidence-based and recognise production systems used in Australia.

“Standards like the Australian Government’s Climate Active product certification scheme will be important components of this evidence base.”