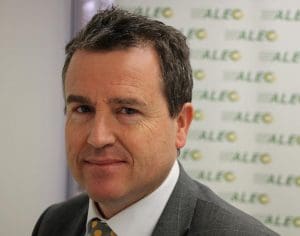 LACK of awareness of how the live export industry works might be its greatest threat, according to the Australian Livestock Exporters’ Council’s incoming chief executive officer Simon Westaway.

Mr Westaway officially started in his new ALEC role this week after being confirmed on August 1.

In an ALEC media statement, Mr Westaway said that advocating on behalf of livestock exporters would be an important and rewarding challenge.

“The overall strength and size of Australia’s livestock export sector, as well as our strategic alignment with supply chain partners both here and overseas, means it is absolutely critical that we speak with one voice and articulate our story very clearly.

“While the economic and ethical imperatives of our industry are very compelling, perhaps our greatest threat is a lack of awareness about how the livestock export industry actually works, including the world-leading animal welfare, control and traceability standards built in to our market systems,” Mr Westaway said.

The new ALEC CEO is undertaking a series of industry briefings and meetings with key government and industry stakeholders, with ALEC chairman Simon Crean and highly regarded livestock industry figure Dr Peter Barnard, who has been acting as interim ALEC CEO in recent weeks.

He will attend his first ALEC board meeting in Perth later this month, ahead of ALEC’s annual general meeting in Canberra on October 26, which coincides with the industry’s major event for 2016, LIVEXforum.

“We are a strong, professional and highly integrated industry, and I am looking forward to supporting our members’ best interests.”