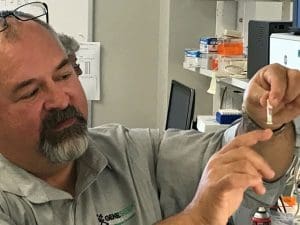 INNOVATIVE Merino and terminal sheep breeders are reaping the greatest benefit from sheep DNA testing developments, according to new data released by the Sheep CRC.

The Cooperative Research Centre for Sheep Industry Innovation or Sheep CRC said new data from Sheep Genetics shows the impact that introduction of genomic technologies has had on the rate of genetic gain within the Australian flock, and the associated improvement in flock productivity.

For a number of Merino flocks that started using genomic information when it was first introduced in 2011, the rate of genetic gain based on the Merino Plus index has increased by 39 percent and for terminal flocks the increase has been between 11pc for the Carcase Plus index and 47pc when including eating quality traits, the Sheep CRC said.

The Sheep CRC estimated that increased rates of gain equate to as much as an additional 35c/ewe/year over and above the rates of gain being achieved in the pre-DNA era.

Sheep CRC chief executive officer Professor James Rowe said use of the new DNA technologies is increasing rapidly with the numbers of both parentage and genomic tests more than doubling over the last year.

“Seeing the CRC’s blue sky research transformed into standard practice for leading Australian sheep producers is a great outcome and a result of our productive relationship with Neogen,” he said.

“On the Merino side it is getting your pedigree information sorted out and in the terminals, you are getting this focus on eating quality, which is very important as these are the things you can’t measure without the DNA.”

The Sheep CRC board recently toured the upgraded Neogen Australasia’s processing facility at the University of Queensland, Gatton and saw that robotic tissue analysis has helped reduce sheep DNA test turnaround times to weeks rather than months after

Over the last six months in-laboratory turnaround times have been reduced to under three weeks, whereas these were as high as 12 weeks last year when blood samples were being sent to the United States for processing. During a recent Neogen facility tour, the Sheep CRC board was told producers who provided DNA samples using tissue sampling units, rather than the traditional blood cards, would be the immediate beneficiaries of the improved turnaround times.

Professor Rowe said during the laboratory tour and our meetings afterwards, it was very clear that TSUs are the best method for delivering processing efficiencies for DNA testing.

“The automated laboratory robotics used to handle the TSUs contribute to greater precision and faster processing – adding to consistently superior data quality and success rate when compared to blood cards.”

Professor Rowe said access to a state-of-the-art genomics laboratory within Australia had overcome one of the biggest problems that industry had faced in developing commercial scale use of DNA technologies.

“While sending samples to the US for processing provided a high quality result at the right price, there were always unpredictable issues with postal, courier and customs services.

“Fast turnaround time is particularly important in sheep breeding operations, with increasing use of young rams and narrow windows for important selection decisions. Having certainty in turnaround times therefore represents a game changer for many breeders,” Prof. Rowe said.

Prof. Rowe said about 200,000 rams are sold each year backed by DNA measurement and breeders are starting to use DNA testing “in numbers”.

“More and more studs are using the information and using it systemically now.”

Professor Rowe said now that turnaround times are under control, the next hurdles would be price and the predictive accuracy.

“But those are all moving in the right direction,” he said.

The understanding of how producers can use the information gained from genomic testing in breeding plans is also important, he said.

“There are many different angles that we are working on and there is no single silver bullet.

“But if all the things that we are doing start improving people’s confidence in the technology and their understanding of the benefits, I think that is where the change is happening.”