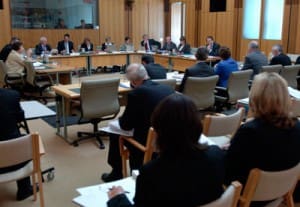 The chances of a senate probe into market consolidation in the red meat processing sector going ahead are strengthening following confirmation that three Nationals Senators are already drawing up the Terms of Reference required for an inquiry to proceed.

The call for a senate inquiry was launched by the NSW Farmers Association and Victorian Farmers Federation last month after several processors decided not to compete at the first cattle sale held at the new Barnawatha saleyards near Wodonga.

Only Teys Australia has spoken publicly about its decision not to compete at the sale, telling Beef Central at the time that it would not compete under the policy of pre-weighing cattle adopted by the centre.

Teys general manager livestock Geoff Teys told Beef Central that the company had explained to local agents when construction commenced at the facility more than a year ago, and again six months ago, that it would not compete on cattle at the centre if a pre-weigh only system was in place.

The company’s preferred option, suggested to Barnawatha agents, was to offer both pre and post-weigh selling, and “let the market sort it out.”

The concern processors have with pre-sale weighing is the impact it has on inconsistency in dressing percentage in slaughter cattle.

Cattle which have travelled a long distance prior to sale or have been under a long curfew can be empty while others can be full. The result is that cattle that are identical on a pre-sale weight basis can produce a five percent difference in final dressing percentage in the abattoir.

Processors say post-weigh selling provides more yield consistency, which gives them greater confidence to bid up, knowing what the yield performance is likely to be at the meatworks. The overwhelming majority of saleyards across Eastern Australia operate on as post-sale weigh basis, for this reason.

The absence of several processor buyers at the first Barnawatha sale has been widely attributed as the reason for a 20-30c/kg fall in prices at that sales compared to the previous Wodonga sale.

Some deny, however, that their non-attendance at the sale had anything to do with protest. In the case of the nation’s largest processor, JBS Australia, it had lost two days’ kill at its major Dinmore plant just prior to the sale, due to technical problems, greatly reducing its requirement for cattle.

The NSW FA and VFF have since used that incident and the recent JBS take over of Primo to launch a campaign for a senate inquiry into market consolidation in the red meat processing sector. Those calls have now been supported by Nationals Senators Barry O’Sullivan, John Williams and Bridget McKenzie.

In a statement released to media this week, the Senators said that the saleyards boycott at Barnawatha and the loss of another buyer through the takeover of Primo meant that it was time for the issue of market consolidation in red meat processing to be brought into the public domain.

The Senators said they are currently drafting a Terms of Reference for a Senate Inquiry, which will cover collusion of buyers, market powers, pre and post-sale weighing and other aspects.

It is expected the Senate Inquiry could be approved by parliament as soon as the next sitting fortnight.

Senator O’Sullivan said the concentration of foreign ownership in the processing sector and ongoing producer concerns about potential market imbalances in the beef supply chain justified a Senate inquiry.

“There were a lot of questions raised about farm gate profitability and price transparency during the recent Senate Inquiry into grass fed beef levies,” Senator O’Sullivan said.

“I have also travelled extensively through Western Queensland since becoming a Senator last year and many producers have expressed ongoing concern over the market powers of the processing sector.

“These Senator inquiries are important to take a closer look at our beef industry and determine the steps we need to go forward.

“We must ensure the underlying structures of our beef sector remain strong.”

Senator McKenzie said there should be a level playing field across the supply chain.

“As if drought, the high dollar, low commodity prices and the live exports ban has not been enough to battle through, now they are being knocked down again,” Senator McKenzie said.

“The Australian Competition and Consumer Commission is investigating the buyer boycott at Barnawartha saleyards earlier this month – an action that has led to allegations that processors are mistreating farmers.

“No-one can explain to a cattle producer why his returns are diminishing yet in the supermarket the retail price for beef has continued to rise upwards of $16 a kilo.”

Senator Williams said he was disappointed with the JBS /Primo result last week.

He added that current competition laws needed to be reviewed to stop similar occurrences into the future.

“Producers and those in the livestock industry are adamant this will reduce competition,” Senator Williams said.

“I am extremely concerned at the buyers boycott in Victoria and glad the ACCC is investigating if any laws were broken. “

An inquiry into the red meat processing industry will explore many issues because producers should not be battered from pillar to post.”

Beef Central sought comments from Labor Senator and chair of the Rural and Regional Affairs and Transport committee Glenn Sterle earlier this week on whether Labor Senators were likely to support an inquiry but had not received a reply by the time of publishing this article.