WOOL bale branding and the myriad identification marks that end up adorning bales moving from farm to factory could soon be redundant.

The system aims to solve the current ‘nightmare’ of bale identification by using an AWEX-agreed international standard RFID/QR tag capable of tracking greasy wool from farm to early stage processor.

AWH national wool manager David Mitchell said the system had the potential to save the industry up to a million dollars annually. AWH is initially introducing the system at the point of packing for export at no charge to exporters. 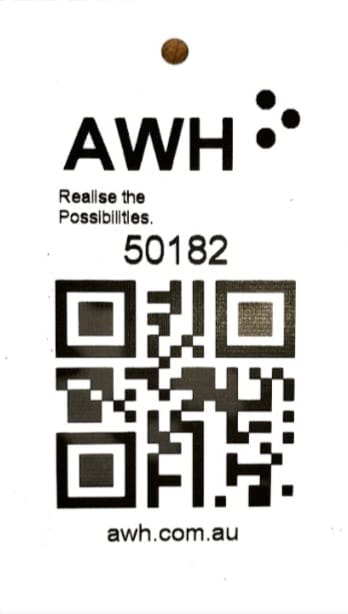 The tag will be stapled to packs and will carry no data, but will enable the provision of greasy wool specification data via an electronic packing list. Data from the AWH packing house, plus data the exporter chooses to provide, will be combined into an electronic file linked to each tag, suitable for importing into the IT system of an early stage processor. This information could also include National Wool Declaration or AWTA certification data.

Mr Mitchell said once tag use was established in its packing house network, AWH will introduce it into its broader wool handling operations.

The new technology has been designed to complement AWEX’s promotion of electronic wool classer specifications and tags used on farm in its WoolClip and eBale programs. Mr Mitchell said AWH expected to eventually connect its electronic tagging system with the AWEX system that operates from farm wool sheds. AWH would then retire its physical tag in favour of the AWEX in-bale tag.

“We can read AWEX tags and they can read ours.”

Mr Mitchell said AWH had discussed with AWEX how it could speed up the adoption of electronic bale identification and decided to introduce the tags at its packing houses to get a faster export market impact. Initially the system would be rolled out in AWH’s Melbourne and Sydney packing houses and then extended into AWH facilities in Western Australia, Adelaide and Brisbane, and into brokers’ stores, he said.

“The critical things is it’s going to be national.”

AWEC chief executive officer Mark Grave said AWEX has had a strong relationship with AWH on the project for years. He said it was important to AWH as the largest warehouser of wool in Australia.

He looked forward to electronic bale identification being implemented across the industry.

“If AWH can accelerate that process good on them.”

System has advantages for overseas processors An AWH worker points the orange beam of a QR scanner to read an electronic bale tag.

Mr Mitchell said electronic bale tagging meant overseas buyers will be able to purchase wool in bales with a common tagging system. The International Wool Textile Organisations and the Nanjing Wool Market in China have been notified of the imminent launch.

“We’ve also spoken to the South Africans and the New Zealanders, and they are very much aware and watching and interested to see how this unfolds.

“So then we’ve basically got the Southern Hemisphere, or the key wool-producing countries of the world, potentially working together with a common identification system that the mills can use.”

Industry saving of up to one million dollars annually

AWH handles about 60 percent of the Australian wool clip sold at auction, providing export packing and dumping services through a national warehousing network. But Mr Mitchell said AWH had always been critical of the way bales were marked and identified in wool sheds, in brokers’ stores, for preparation for sale, export and processing.

“We estimate loosely, between overweights, misdescriptions and duplications, it could be costing the Australian industry nearly a million dollars (annually),” he said.

AWH southern region general manager Greg Williamson said he could see the system reducing ‘mispicks’ when packing, with each bale able to be scanned into a shipping box.

He said there are still many points of manual data entry, at core and sort lines, which could be automated by the electronic tag system, minimising human error. The current manual countermarking of bales on receipt into store and on despatch could also be eliminated.

Mr Mitchell said the need for manual data entry at overseas mills would also be reduced by the electronic tagging system. AWH is anticipating a high level of interest from major early stage processors of Australian wool.

“We recognise that this may not be for every processing mill, but the opportunities for those that choose to endorse this technology will be great.”

Other benefits of the electronic tag identification system include tracing the origin of wool, locating and identifying wool in a warehouse or after dumping, and the efficient and accurate blending of wool prior to scouring.