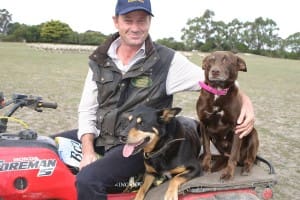 Back home after a trip to Tasmania to win his second Australian Yard Dog Championship – black and tan Kelpie Go Getta Brue was running around like any farm dog — keen to follow the four-wheeler to the next mob.

Joe Spicer’s Go Getta Kelpies have won most accolades and titles it is possible to win on Australia’s yard dog trialling circuit, and he maintains he has done it with good farm dogs.

Joe is concerned that many farmers still discriminate against Kelpies that win yard trials, failing to recognise that most are practical farm dogs first and foremost.

Bond is forged through real work

The bond that with his dogs that helps win trials is forged by real work in his stock contracting business and on his Glenthompson farm run with partner Sharon Barry.

“I quite often find that you will train up a young dog and not be on the same wave length or channel until you go and do the real work with your dogs – that’s when you gel.

“When you put in the hard yards and have those long dusty hard days, and come through that together and barrack for each other then you build the connection and bond that will last a lifetime.”

Trial dogs get a chance to show skills

Joe Spicer said he often hears criticism that he has “brood” bitches in his Go Getta stud.

“There is no such thing as a brood bitch in this stud, they are all proven working dogs that work large numbers of stock on a regular basis.

“The only difference between a farm dog and a trial dog is that the trial dog gets the opportunity to show its skills to a wider audience, rather than being an unsung hero on a farm.”

Trial work can improve the dog and the handler for farm work.

“You’ve got a lot more control and a much clearer understanding – you both learn through real work and on the trial ground that less is quite often more.

“It’s about building a rapport with your stock and making sure that they remain calm,” he said.

“You can 100 times more work done with less effort, which is what we are trying to achieve – low stress stock handling applies not only to the stock, but also to the dog and the farmer.”

However, Joe said his dogs’ first and third placings in the 2015 Australian Yard Dog Championships were more special to him than most.

His 10-year-old veteran campaigner Brue came back from a knee injury to win his second national title, his partner Sharon Barry was able to come with him and their nine-year-old Go Getta Token placed third in the event – the top-placed bitch. NSW’s Peter Darmody and Condover Strike was second in the championship final.

Brue won the event in 2012 and competed in the championship this month after recovering from a serious injury and reconstruction of his back near leg knee last year.

“It was described by the person on the mike that this dog is 10, but works like a two-year-old,” Joe said.

“The exuberance, enthusiasm and connection with me that Brue has, is unique.

“Quite often soft dogs have that connection with their owner or workmate, but dogs like Brue that can have a lot of force and a lot of presence are usually more independent,” he said.

“Brue’s main asset is he has a lot of strength and force, but will use that in conjunction with me and work with me, rather than for himself or against me.

“The bond is what makes him unique,” he said.

Joe said when I got into breeding, he saw that Kelpies had a lot of natural ability, but they lacked the compliancy to work with their master as a team.

“So I went about breeding more compliant dogs; Brue has been the main sire in our stud to do that,” he said.

“That’s what makes him unique, in that he has a magnificent temperament; he can be calm, switch off and lie on the back doormat, but he also has a lot of power and presence, and demands respect from his stock.

“He has never taken a backward step from a ewe, ram, a beast, you name it – never shown any lack of strength or fear with stock,” Joe said.

“He will barrack for me until he dies – you couldn’t ask for a better farm dog.”

Joe said the 2015 championship was special because his partner Sharon Barry was able to come with him to Tasmania. He recently gave Token to Sharon as her dog to develop their common interest in the dogs.

“So she was stoked that Token did so well – she has trialled Token and placed with her.

“I’ve got plenty of dogs, and Token and Sharon have always got on well.”

“Token has definitely got all the skills that are required, in that she can be quite steady and reads her stock and has a lovely effect on her stock, but can flick a switch and give you as much force as you require.

“The force is very pinpoint; she knows how to read stock and when and where to apply it naturally.”

Token used her “pinpoint” force to be the top-placed bitch in championships, he said.

Joe said it was very tough to get the five-year-old Merino ewes used in the championship runs to lead up the race and the draft, and on and off the trailer. Every championship dog had to contend with fresh sheep.

“It was a very tough trial.”

“The unique thing about this championship is that every handler got fresh sheep; none of the sheep were recycled,” he said.

“It’s the first time I’ve ever had fresh sheep for every run, which means it is as level a playing field as you could possibly get.”

Dogs in the 2015 championship also had to contend with 18 sheep per run; more than is normally used in a yard trial.

“That meant that all the pens were very tight and there wasn’t a lot of room for the dogs to manoeuvre around the sheep and get them to point in the right direction and create a leader up the race, through the draft or on and off the trailer.

“It took a dog that could not only read and hold his stock together, but could apply force in the right place at the right time.”

Seven Go Getta dogs qualified into the second round of the championships and five went through to the final. He put his success at maximising his number of top-qualifying dogs to 20 years of sourcing top genetics, focusing on quality rather than quantity, and mating the best to the best “to make something better.”

“That’s what breeding is all about – you need to be mating to achieve significant genetic gain with every generation, otherwise you are just a multiplier.”

But Joe said unfortunately the new code and legislation for dog breeders in Victoria would lead to declining quality in the Australian working Kelpie.

He said because a Kelpie’s genotype (it’s genetic working trait makeup and heritability) and phenotype (the dog’s expression of working traits) can often be different, breeders don’t know how a dog is going to breed it is bred.

“To do that you need to keep dogs to a certain age and you need to be able to keep a number of dogs.”

“These laws are made by people who have no idea about breeding, running a business or what’s involved with working a dog.”

The legislation makes it easier for genuine breeders to be undercut by cheap nasty “mistake” litters that are given away, he said.

Joe said the main issues are the copious amounts of paperwork that will make it unviable to run a business, it is harder to keep the number of bitches to breed quality dogs and quite often a bitch or dog isn’t bred from until they are a proven worker in a wide range of situations on different stock.

“All my bitches are working dogs and quite often you can’t breed from them on a regular basis.

“The regulations make it difficult to breed a number of litters from an older bitch, when obviously we should be breeding more from our top bitches rather than from those that aren’t as good.

“The code doesn’t allow you to that.”