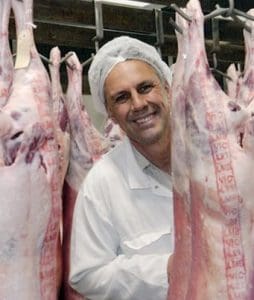 The company’s Warragul abattoir was the first Victorian processing plant to gain from the Department of Economic Development, Jobs, Transport and Resources for the electronic scanning of sheep and last week scanned its first new season’s lambs with EID tags.

The Radfords Meats managing director said his Warragul plant received its Tier I license in May and he hoped with the electronic tag identification capability this would open up new market opportunities in the Middle East and give it a “headstart” on other companies.

“We hope that will be the case.

“It’s going to be a marketing tool for us.”

“But interestingly we got some lambs out of Sale last week that was the first of the new season lambs with the ear buttons (EID tags).

“As far as the compulsory tags in new season lambs in Victoria, that was our first run.”

Mr Radford said the company had been trialling its electronic tag scanning equipment for two years, using the ITP system at a cost of about $300,000 with the support of the department. Recent trials with producers putting EID tags in old lambs had achieved read rates of up to 97-98pc but the ultimate goal is 99pc.

Mr Radford said the result from the Sale lambs proved that the system worked.

“We’re very proud of what we have done.

“There have been other companies trialling hook tracking who haven’t been as successful as ours.”

Mr Radford said he did not think there would be any incentive at this stage for interstate producers to put electronic tags in their lambs, but he believed mandatory EID tagging of sheep and goats would extend into other states as it had for cattle. He is a member of the Australian Meat Industry Council’s processor council.

“I’m on the cattle advisory committee and have been from day one, when we implemented this same system for cattle in Victoria.

“It was only a matter of time with the pressure put on them by Victorian processors that the rest of the states followed,” he said.

“I’m sure that will happen (for sheep and goats) as well.”

He was confident there would be a national sheep and goat EID roll-out and “the sooner the better”.

“I reckon in the next two years it will compulsory everywhere – that’s my gut feeling.”

Mr Radford said the Sheepcatcher II exercise had exposed how dangerous it is to continue with a voluntary mob-based identification system for sheep and goats nationally.

“There are flaws all through it and the Sheepcatcher II exercise shows how exposed we are that if we have an exotic disease outbreak what it will cost our industry.

“With the consequences down the track, it’s a no-brainer.”

Victoria’s Chief Veterinary Officer, Dr Charles Milne, will present on the biosecurity benefits of rolling out the state’s new mandatory sheep and goat electronic ID system to producers at Sheepvention.

Agriculture Victoria’s Manager of Sheep EID, Michael Bretherton, said Dr Milne would be accompanied by Nathan Scott, from AchieveAg Solutions, to talk about the on-farm benefits of sheep electronic ID and what it can do for farmers.

“Our team will be on hand at Sheepvention to continue to support producers as they transition to the new system by providing extension and education.

“Dr Milne is particularly qualified to speak about the benefits of EID from a biosecurity perspective having managed field responses in south-west Scotland during the UK’s 2001 foot-and-mouth disease outbreak,” Mr Bretherton said.

“Nathan Scott will also demonstrate how electronic ID and the data collected can be used for better on-farm decision making and how to unlock the potential to improve flock management,” Mr Bretherton said.

Agriculture Victoria staff will be available across the two-day event to provide information and advice on a wide variety of sheep needs at their marquee at site 76-79-87-90.

Dr Milne and Nathan Scott will speak in the Grave VIP Room at Sheepvention on: