National roll-out of electronic NVDs in 2015 to be discussed 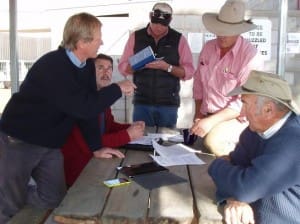 The potential national roll-out of electronic National Vendor Declarations next year will be discussed at an industry open day in Victoria at Attwood next week.

The open day on November 20 at the DEPI Attwood offices has been organised by the Livestock Saleyards Association of Victoria to showcase a range of eNVD solutions and review results of trials by the LSAV.

LSAV executive officer Mark McDonald said the association was getting to the end of its eNVD trial and wanted to showcase the systems that would be available.

“It is gaining some legs now because it looks like being the launching pad for a national roll-out starting next year.”

Trial partners Dairy Australia, LSAV, DEPI and Federation University, along with processors and the Victorian Farmers Federation have been working on how to replace the paper trail through the livestock market chain, he said. The trial report is expected to be completed by January next year.

“We’ve done all market chains so far, except feedlots, which is the one we’ve got to complete in the next month or so,”

The main funder of the eNVD trial has been the Department of Business Innovation in Victoria through its Digital Futures Fund, plus support from Dairy Australia and the Victorian Sheep and Goat Compensation Fund.

Meeting of the minds around eNVDs

Mr McDonald said there has been a concurrent MLA project looking at the concept of a central database to collect information.

“We were looking broader – looking at how it might integrate with all the systems – saleyards and processing systems.

“Both of the projects are coming to an end about now and there has been a meeting of the minds I suppose,” he said.

“I think there is pretty strong support for the process to roll ahead into next year and commencing a national roll-out.

“It depends on how it would be done, but our argument would be that you bed it down in one jurisdiction like Victoria first and then go from there.”

The SAFEMEAT Strategic Initiatives Review Committee led by Coleraine producer John Wyld has also been a major driver of the NVD improvement process.

Mr McDonald said the eNVDs can be designed so they cannot be filed incomplete.

“One of the benefits we see is that you can actually send extra information as you go along.

“A farmer could send more information than is required in the questions and add pedigreeds or weights to it,” he said.

Processors have been big supporters of eNVDs because electronic information collection will save them time, he said.

“In saleyards, we should be able to generate pre-sale catalogues a lot faster than we do now.

“It ticks a lot of issues to go electronic at this point in time.”

The eNVD open day will start at 10am with a ‘meet and greet’ with system providers, followed by a panel discussion on implementation options. Sheep RFID systems will also be displayed.