FLYSTRIKE and lice chemical delivery via tiny hollow nanoparticles less than a thousandth of a millimetre across has the potential to boost the arsenal of Australian sheep producers battling the costly conditions.

Senior research fellow Dr Peter James from UQ’s Centre for Animal Science is heading the nanotechnology project that could be part of the solution to problems estimated to cost the Australian sheep industry more than $400 million a year.

The Australian Wool Innovation-funded project is designing and testing unique silica nanocapsule particles with surface spikes purpose-built to give prolonged periods of protection against flystrike and lice.

“New methods that can provide longer periods of protection are required to counter the development of resistance to flystrike insecticides and to support the reduced reliance on mulesing, a surgical technique that has been relied upon over many years,” Dr James said. 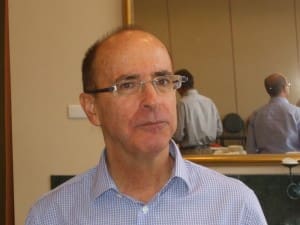 But Dr James does not see the technology as removing industry pressure to develop flystrike-resistant sheep.

“Flystrike control needs an integrated approach; you are going to need them all and if you’ve bred resistance in your sheep, it’s a bit like mulesing, it’s there forever, whereas this lasts longer, but not forever.”

The technology shows promise in increasing the effective control period and reducing the number of treatments needed for control. But sheep producers should not expect commercialisation of a product anytime soon, with pen, field and safety trials yet to be funded.

The researchers have been studying the use of nanocapsules to absorb and deliver currently available flystrike and lice chemicals and then attach to wool, flies or fly larva for extended targeted control. A method for loading the particles with chemicals has been developed.

Dr James said the results showed the careful choice of active ingredient can ensure minimal residues or off-target effects for the sheep.

“Historically, chemical pesticides have been delivered in relatively large doses to achieve extended protection, but in slow-release formulas doses can be smaller,” he said.

“By using nanocapsules, the chemical can either be delivered at steady levels over a prolonged period or designed to release only when needed.”

Materials scientist Professor Michael Yu said UQ had patented the silica nanoparticles that feature a hollow cavity and a porous silica shell. The silica particles break down to dust and release chemicals over time.

“We’ve tested a number of designs, but the most promising is a nanoparticle that has whisker-like spikes which cover the outer surface,” Professor Yu said.

“These spikes help the capsules ‘stick’ to either the fleece fibres or to the blowflies.”

Dr James said the chemical-loaded nanocapsules have been tested in the lab on wool with fly larvae, but pen trials with larval implants are needed to test the mechanism further.

“We’ve done some work where we’ve treated the sheep, taken the wool off and inside and compared the protection that we got of that wool against the maggots in the lab – and we get an extended period of protection (the larvae died) compared to other formulations.

“In all the tests that we’ve done, we get extended periods of protection with our spiky surface nanoparticles.”

Dr James sees potential for the nanocapsule system to manage breech and body flystrike, and using the current methods of chemical application such as backline, pour-on or spray delivery. The technology worked with available organic and water-soluble chemicals, and a natural plant extract.

“One of the real advantages that we see for this is that with chemical resistance developing and the diminishing armoury of pesticides that we might be able to use chemicals that unformulated don’t last long enough to be practically useful.

“But if we put them into this formulation we can extend them, so we might be able to use chemicals that we know kill larvae, but break down quickly because of photo-degradation due to sunlight or washing out by rain.”

AWI general manager research Dr Jane Littlejohn has welcomed the research and said “nanotechnology has the potential to increase the range of treatment options available to wool growers.”