AUSTRALIA’s lamb industry is expected to enjoy stable to moderately higher prices into next year, continuing a good run since 2013, according to the latest National Australia Bank Agribusiness Commodity In Focus Lamb and Sheepmeat report.

NAB expected lamb and mutton production to fall more than 5pc in 2016-17, driven predominantly by a fall in mutton with lamb remaining more stable.

The value of lamb and mutton exports is forecast to fall 7.6pc in 2016-17, reflecting lower volume. NAB is forecasting the $A to fall to 73US cents in the first quarter of 2017.

“We remain upbeat in our assessment of the industry.

“Mutton and live sheep has seen somewhat more volatility in export markets and we expect a pull-back in mutton exports with the need to replenish flocks following dry conditions in parts of the country last season. 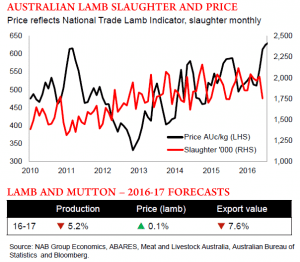 Mr Ziebell said although prices are expected to fall during the spring lamb flush over the coming months, NAB placed lamb prices at 0.1 percent higher in 2016-17.

As a reflection of higher prices, ABARES data showed Australian domestic consumption of lamb has dropped from around 25kg of lamb per capita per annum in mid-1970s, to less than 10kg in 2014.

With the lamb industry expanding despite domestic consumption falling, most Australian lamb (54.5 percent in 2015) is now exported. This compares with around one-fifth of lamb being destined for export in the mid-1990s.

Mr Ziebell said export markets for lamb are reasonably diversified, with the United States and China accounting for a substantial volume.

“However, the Middle East remains a very important market, particularly for mutton and live sheep.

“Steep falls in global oil prices since 2014 has placed pressure on some economies in the region,” he said.

“Offsetting this is the return of previously embargoed Iran to the global lamb and sheep meat market.”