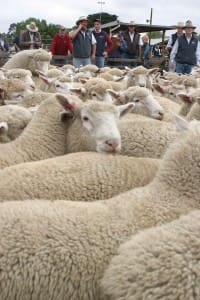 Heavy lamb prices could fall next year and wool demand might be subdued, according to National Australia Bank’s November Rural Commodities Wrap. The NAB report said heavy lamb prices fell 2.3 percent in October to 461 Ac/kg, solidifying losses in August and September and reflecting higher seasonal supply. “Prices are now lower than any point since February 2014 on a monthly average basis as a dry spring in much of the country has seen higher turnoff than usual. “Meanwhile, lamb exports continue to grow, with a record 24,202 tonnes shipped in October.” NAB said domestic consumption has lagged in recent years however, despite higher production and intensifying supermarket competition. “Domestic consumption fell 6pc in 2013, with 54pc of Australian lamb exported. “This continues a generally downward trend since 2009.” NAB said per capita consumption in 2013 fell by 8pc to 9.1kg per capita from just under 10kg per capita in the previous year. The bank said its outlook for lamb in the coming year is clouded by unfavourable summer rainfall forecasts for most lamb production regions, combined with the ongoing effects of drought induced destocking on flocks. “Overall, we expect production to decline 2.4pc in 2014-15 as producers look to rebuild flocks. “We forecast heavy lamb prices to fall 3.6pc in 2014-15.”

Potential for wool demand to be subdued

NAB said wool prices were up 1.9pc in October, with the benchmark Eastern Market Indicator averaging 1,040 Ac/kg in response to an increase in orders and lower AUD. “Price movements have been small for much of the year – October marked the sixth straight month in which prices moved less than two percent month-on-month. “The year has nonetheless been mixed for many producers, as subdued prices continue to cut into profitability.” While the industry has been facing pressure from substitute (mostly synthetic) fabrics for several decades, NAB said there has been a decline in premiums for high grade super and ultrafine grades since the Global Financial Crisis, in response to lower demand for premium suiting and haute couture. The bank said China is the largest customer of Australian wool and in 2012-13, more than three quarters of Australian wool exports were sent to China. “Any economic uncertainty in China brings the risk of falling wool demand and lower prices. “Should the cooler economic conditions experienced in China in Q3 2014 continue into Q4 2014 and 2015, reflecting the continued reluctance of Chinese policy makers to implement broad based stimulus, it is possible that wool demand will be subdued.”

NAB revises A$ forecast down

NAB said it expected the Australian dollar (AUD) to enter the New Year as low 85-86 US cents. General Manager of NAB Agribusiness, Khan Horne said the AUD is reaching levels not expected to be seen until 2015 due to the continued strength of the US dollar (USD). “We have also revised the forecast low point for the AUD from 80 US cents to 78 US cents, which we expect to see in 2016. “The lower AUD has been driven in large part by an appreciating USD, combined with falling terms of trade, and more recently, an unexpected decision by the Bank of Japan to further ease policy,” he said. “This has lent some support to Australian export prices for wheat and dairy since late September. “The falling AUD is a real boost for agriculture, and combined with the recent announcement of the China – Australia Free Trade Agreement, conditions for 2015 are looking positive for agricultural exporters.” Mr Horne said the RBA kept the cash rate at 2.5 per cent in November as expected, and unchanged for 15 months. “We still don’t anticipate any change in the cash rate until the end of 2015. While there are tentative signs of an improvement in household spending, this does not yet signal a sustained change in household and business conditions. “In the absence of any major surprises, the cash rate is unlikely to rise until late next year as monetary policy commences its return journey to normality. The NAB Rural Commodities Index was down only 0.6 per cent in AUD terms in October, as a falling AUD offset the effects of falling international commodity prices. In USD terms, the index was off a more substantial 3.7 per cent, falling for a sixth straight month. For further analysis, download the full reports. Rural Commodities Wrap – November 2014 (PDF, 2MB) Special Report: China-Australia Free Trade Agreement (PDF, 574KB) Source: NAB November 2014 Rural Commodities Wrap