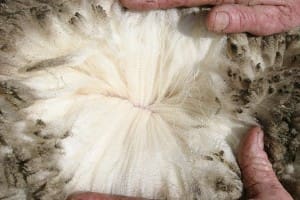 WOOL prices have been forecast by the National Australia Bank to rise more than 7 percent in the next financial year after a 14pc lift in 2015-16, underpinned by a lower $A-US dollar exchange rate.

In the NAB Agribusiness May Rural Commodities Wrap, the bank’s analysts said after several years of unfavourable prices, wool producers have enjoyed a run-up in the AWEX Eastern Market Indicator since the second quarter of 2015.

The bank said wool is sensitive to movements in the Australian dollar exchange rate and its expectations for commodity prices in the coming year are underpinned by its forecasts for a generally lower $A, tracking in the high US60s range in late 2016 and 2017.

“While the $A strength earlier this year limited price upside, the recent fall in the exchange rate points to an upside for price.

Lamb and mutton prices to lift, production to fall

NAB is forecasting lamb and mutton prices to lift 4.2pc in 2015-16 and 0.6pc in 2016-17 as production decreases. The bank said its production and price forecasts for lamb reflect the moderately higher prices this year.

“Indeed, the Eastern States Trade Lamb Indicator has been trending upwards since 2013, albeit with strong seasonal variation reflecting the usual spring lamb flush.

“Production and exports have been elevated amid dry conditions over the past two years, but these levels were not sustainable and we see lamb and mutton production falling 7.5pc in 2015-16 and 6.1pc in 2016-17,” the bank said. 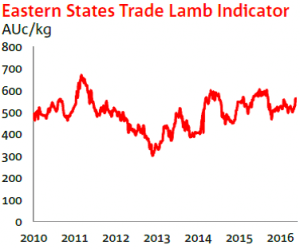 No Reserve Bank rate rise  before 2018

NAB said the Reserve Bank (RBA) cash rate cut in May has seen the Australian dollar fall quite rapidly, which is likely to provide support to Australian prices over the coming months.

The bank does not expect the conditions for an RBA rate rise to be met before 2018.

Click here to read the NAB May Rural Commodities Wrap.