Mutton surges past 400c/kg as supply drops and rain falls 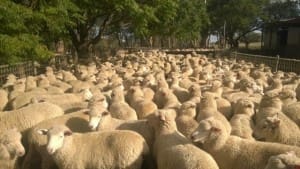 Mutton prices surged early this week as demand strengthened for quality sheep of most weights in the much lower national offering.

Prices lifted by up to $20 for top quality heavy mutton drafts at Dubbo, Bendigo and Ballarat, and some lighter sheep lines – 14-15kg cwt bare shorn Merino ewes at $65-$70 with a sub-$1 skin — were estimated to come out at better than 420c/kg cwt.

Processors have fewer sheep on hand

Agents reported that processors had fewer sheep and lambs around them, and rain in NSW could be expected to limit saleyard supplies and further firm heavy sheep rates if NSW processors come south.

“It was a very solid good quality market, it was also wet weather market, with prices much higher than we normally expect.”

There was no doubt that processors were running out of grown sheep “and not expecting them to be there”.

“It is only a matter of time that lamb numbers would start to show a shortage as well, particularly in my area.”

He said the sheep prices he saw this week looked to be extreme, but he expected there could be more movement in lamb prices.

“You here reports that there are a lot of lambs out there, but I don’t know where they are.

“They are definitely running out of sheep.”

After Tuesday’s saleyard sales, the National Livestock Reporting Service quoted significant improvements in all Eastern States Daily Indicators for lamb and mutton categories. The ESDI lamb levels are: restocker 539c/kg, up 12 cents; Merino 495c/kg, up 6c; light 517c/kg, up 16c; trade 532c/kg, up 9c; heavy 534c/kg, up 6c. The national trade lamb indicator is up 9 cents to 533c/kg and the heavy indice is on 535c/kg, up 6 cents.

In Victoria, the NLRS said light and trade weight over-the-hook lamb rates declined 5c/kg cwt on average this week, while all other categories remained unchanged. Mutton rates were firm week-on-week.

Western Australia’s OTH rates were not available when this story was published.

Dubbo’s heavy sheep up to $20 dearer

The NLRS said the mixed yarding had some outstanding heavy weight lambs and a good number of lightweights. Ideal trade weights were in limited supply.

Tamworth’s heavy lambs up to $10 dearer

The NLRS said numbers reduced following rain on the weekend. There was a good supply of trade and heavyweight lambs, and a fair number of lambs suitable to restockers. The regular buyers attended and there was extra competition for trade lambs. Market trends were generally dearer, with restocker confidence boosted by rain.

Good quality store lambs were $1-$4 dearer. Well-finished medium weight trade lambs were up to $5 dearer. Heavy lambs over 24kg were up to $10 dearer. Export weight lambs were in limited supply and remained firm.

There were some very good longer wool Merino sheep penned in the mixed quality offering. Market trends were dearer throughout, with limited numbers a contributing factor. Ewes were $2-$9 dearer with medium and heavy wethers $10-$12 dearer. Skin values contributed to the price improvement.

The NLRS said lamb quality was similar to previous sales, with some good runs of well-finished lambs and plainer types. Heavy and extra heavy lambs were well supplied. The usual buyers competed in a dearer market.

The NLRS said lamb numbers more than halved following weekend rain and the previous week’s cheaper rates. Prices trended dearer, although buyers were still selective with their bidding on some of the plainer style lambs and not all processors operated at their usual capacity.

Extra heavy export lambs topped the sale at $176.60, not much improved on rates last week. Light weight slaughter and store lambs mostly sold from $80-$96 and were noticeably dearer in places. The general run of domestic lambs, 20-22kg cwt, sold from $102-$118, with the best shaped and presented pens up to $126 on odd occasions. The quality of Merino lambs improved and the best pens of domestic weight grain-supplemented lines ranged from $106-$119. The lead pens of heavy domestic lambs, suiting supermarket orders, sold from $125-$143, at around 525-540c/kg cwt, to be $5-$7 dearer than last week. Bidding for export lambs did vary from firm to $6 dearer depending on weight and quality, with most making $150-$167. Only a few pens of extra heavy lots sold over $170 and up to the market top of $176.60. On a carcase basis a run of heavy lambs was estimated to cost processors 530c/kg.

The NLRS said there was no drop off in quality, with many pens of well-finished trade weight and heavy lambs yarded for the usual buyers.

Naracoorte’s trade and heavy lambs up $10

The NLRS said the usual buyers bid on a better quality yarding. The market was dearer across all categories.

The NLRS said numbers continue to decrease with cropping activities now underway across most areas. Lamb quality lifted significantly, with good numbers of well-finished prime trade and heavy lambs, and some secondary and store lambs. All buyers were active, resulting in good prices across the categories.

Mutton prices lifted again due to numbers and quality. There were good numbers of heavy mutton and drafts of lighter conditioned ewes. Wether numbers were moderate. Ewe demand was strong, with processors paying mostly $3-$5 more.