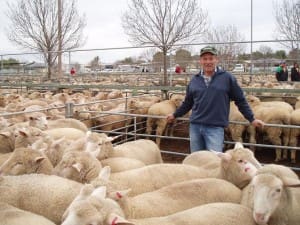 Tempy producer Terry Monaghan sold these crossbred lambs for $203.60 at Ouyen on Thursday.

RAIN, wool prices and declining supplies helped intensify competition for mutton in NSW mid-week with buyers paying over 450c/kg cwt for medium trade sheep at the Wagga and Cootamundra saleyards.

The NLRS said there were also upward adjustments to lamb skin rates this week, reportedly attributed to reduced supplies and the stronger wool market.

At Cootamundra on Wednesday, the National Livestock Reporting Service said the rise in skin rates helped lift sheep prices $8-$12, with medium weight ewes making from $77-$120 and heavy weights to $135. Most averaged 420-440c/kg, but prices went up to 496c/kg cwt for 18.1-24kg sheep, with skins being valued at up to $16. Some sheep lines under 18kg made from 242-544c/kg with skin values of up to $8, but some were freshly shorn young wethers that went to restockers.

Cootamundra stock agent, Steve Tolmie, from Holman and Tolmie, said rain was the main factor in a conservative 10-20c/kg lift in mutton prices this week, with 50mm of rain falling in the days before the sale.

“So our numbers were cut a bit, that certainly would have more to do with it.

“The market for mutton sheep was very strong, compared to the previous sale (two weeks ago).”

The lift in wool prices has lifted prices on sheep and lambs with fleeces, especially unshorn Merino lambs that sold up to $140 with skins valued around $18, he said.

“The lamb market was solid, especially on the light restocking and processing lambs, which made well over 650c/kg cwt.”

A general lack of supply of sheep, exacerbated by retention of older ewes for breeding, was also driving prices, Mr Tolmie said. With lambs fairly solid and quantities in storage, some processors might also be supplementing their kills with mutton. Thomas Foods International confirmed this week that they have been prepared to pay 420c/kg for Merino wethers to build numbers for the return of the company’s Wallangarra plant to operation next week.

“It’s the rain – since when it started about three days we’ve had nearly 70mm and it’s broad, everywhere, that’s why our numbers have been cut down,” he said.

“If you’ve got some wool on them you are in business – the skin value has tripled.

“The numbers were down and they needed them, but you noticed anything with a bit of jacket you got a premium on – I would say it is a combination of both, but mainly the skin value,” Mr Wilks said.

“I think we’ve got a bit more rain coming early next week, so I think a lot of those lighter sheep, restocker lambs and cattle, you won’t see them anymore.”

Despite prices peaking at some NSW sales mid-week, the NLRS ESDI and national indicator for mutton both closed on 387c/kg, down 1 cent.

The NLRS said lamb quality was generally good across all grades. Mainly trade and heavy lambs were penned, with a limited supply of store lambs. All the buyers operated, with solid competition on the trade weights, but a little softer on the heavy end.

The NLRS said lamb numbers eased slightly in wet conditions and the quality was plainer with ideal trade weights in short supply. Most lambs were light secondary types. There were a handy run of heavy weights, but as many as previous weeks. Merino lambs were better supplied. Not all the usual buyers operated in a mostly dearer market.

At the Narromine saleyards on Wednesday, the agents yarded 2400 sheep.

The NLRS said up to 60mm of rain in the area reduced numbers considerably, leaving a mixed yarding of Merino ewes. There was a useful crowd, with buyers attending from Yarrawonga, Forbes and local districts.

The NLRS said lamb numbers halved after soaking rains across the region and quality was generally mixed. A full field of buyers attended, but not all major export buyers operated fully. There was limited restocking activity, with well-bred second cross lambs selling to dearer trends.

Medium and heavy trade lambs sold to fluctuating price trends, depending on quality and finish. The better finished types made from $145-$164, to average 620c/kg cwt.

Merino lambs were in reasonable numbers and well-finished pens suitable for the trade made from $110-$144. Well-bred second cross lambs returning to the paddock sold from $88-$120. Heavy and extra heavy lambs sold to strong competition, with the bulk of the heavy lambs making $148-$168, lifting $5. Extra heavy lambs were generally unchanged to average 591c/kg.

The NLRS said lamb was quality this week. Most of the current buyers were present, but not all operating fully during the market.

Some local restockers were active on lighter weight lambs, with prices for 1 and 2 score lambs easing $2-$5 at times, though mostly unchanged. Medium trade weight lambs also remained unchanged but also had a slightly cheaper trend of $1-$3 at times. Heavier lambs remained firm to be at similar prices.

The NLRS said lamb quality was average, with limited numbers of quality trade weight and heavy lambs and more lighter, plainer types. Not all the usual buyers operated fully, and lambs generally sold from $2-$5 easier, with extra heavy lambs reaching $188. Restockers and feeders paid from $101-$130, and from $50-$65 for lighter lambs. 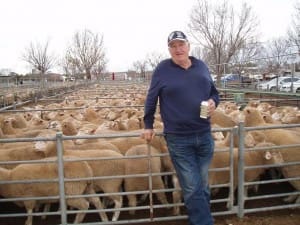 At the Ouyen Livestock Exchange on Thursday, the agents yarded a good quality offering of 8764 lambs and 1125 sheep.

In Queensland at the Warwick saleyards on Wednesday, the agents yarded 1084 lambs and hoggets, and 418 sheep.

In a smaller yarding of lambs and a similar offering of sheep, the market was dearer for all descriptions.

The top-priced pens of lambs made $155 for TD Cooper of ‘Kilcoo’, Bony Mountain, and were purchased by Schulz Meats.

The NLRS said it was a very mixed quality yarding of sheep and lambs. Competition was down as one processor was closed for maintenance and no live export buyers were present.