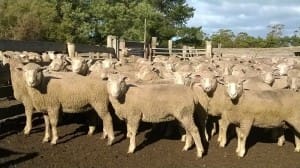 Despite one domestic buyer – Woolworths – not operating at some centres, prices for slaughter and restocker lambs also lifted in saleyards mid-week.

Cootamundra stock agent Steve Tolmie from Holman Tolmie Pty Ltd said the mutton price lift was due mainly to lack of supplies and not necessarily due to the return of processors to the market after maintenance work. Light sheep could be making more than reported rates, he said.

Mr Tolmie said the public holiday on Monday could also have affected the buying behviour of some processors.

The NLRS said lamb quality improved, with a much better selection of trade and heavy lambs, and fewer lighter lambs. The usual buyers operated, but not all as consistently as last week.

Mutton quality improved. Competition was strong over all grades, but especially on the heavy weights. Prices were $7-$14 dearer on most. Medium weights sold from $73-$110. Heavy crossbred ewes reached $134 and Merino wethers made to $140, mostly from 380-410c/kg cwt. But strong competition on heavy weights lifted carcase prices up to 430-440c/kg.

The NLRS said quality was mixed across the lighter weight categories. The usual buyers attended, but not all major domestic buyers operated. There were more store orders operating, with most grazing crops now established in the region. Trade lambs were in short supply, with very few genuine trade lambs offered.

Light trade lambs to slaughter averaged $121.60. Medium and heavy trade lambs sold to fluctuating price trends depending on quality and finish. The better finished types made from $140-$158 to average 602c/kg. Merino lambs were well-supplied and well-finished pens suitable for the trade made from $110-$144. Plainer light weight lambs to the processors sold to stronger competition making from $75-$115. The prospect of rain inspired increased local restocking competition, with prices in general lifting $10 and odd sales more. Well-bred lambs returning to the paddock made from $92-$120. Heavy and extra heavy lambs sold to stronger competition, with the bulk of the heavy and extra heavy lambs selling from $160-$210. Heavy lambs averaged 617c/kg cwt, while the extra heavy pens averaged 587c/kg.

Mutton quality was mixed, with most of the sheep medium and heavy weights. Merino ewes suitable for the trade were well-supplied and competition strengthened due to increased buying competition in this category from most buyers. Trade sheep made from $82-$129.20 to average 461c/kg cwt. Heavy sheep were well-supplied with the heavy wethers igniting the bidding. Heavy wethers made from $135-$146.20 to average 413c/kg. Heavy ewes sold from $112-$145.60.

The NLRS said all the regular buyers operated, except one domestic processor. Lamb buying activity was more subdued and there were fewer restockers and no SA agents operating.

However, some local restockers took the opportunity to buy lines as light lamb prices came back $3-$5. There were some good quality pens of medium trade lambs that sold firm to $2-$3 cheaper. The heavy trade lambs also sold $3-$5 cheaper.

The smaller sheep offering sold to strong competition to be a few dollars dearer on last week. There were some large runs of lighter weight shorn young Merino wethers that sold to the trade from $46-$77.50.

Ouyen heavy and trade lambs up to $6 dearer

Ouyen producer Brian O’Callaghan sold these lambs for $177 at Ouyen on Thursday.

At the Ouyen Livestock Exchange on Thursday, the agents yarded 10,477 lambs and 853 sheep.

Most of usual buyers attended, but one trade buyer was not operating. Heavy and trade lambs were firm to $6 dearer, and light trade weights and store lambs sold $5- $8 dearer. Mutton prices remained firm.

The NLRS said the mixed quality yarding was predominantly young store Merinos. Competition was solid from a full field of buyers and prices were firm on last week’s market.