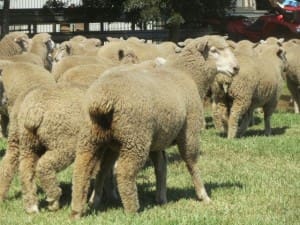 These 17.2 kg cwt Poll Dorset cross lambs sold for $112 at Scone on AuctionsPlus on Tuesday.

Mutton prices took another jump in saleyards early this week as export demand remained strong and rain kept sheep on farms in parts of NSW.

Prices for quality mutton reached 390c/kg-410c/kg cwt at Dubbo, 340c/kg-370c/kg cwt at Bendigo and 350c/kg-380c/kg at Ballarat, with NLRS data indicating some categories were even dearer.

Heavy lamb prices also rose generally early this week, with the ES indicator up eight cents to 555c/kg cwt and the national indice up nine cents to 556c/kg. The trade weight indicators both dropped to close on 543c/kg cwt. The ES Merino lamb indicator closed on Tuesday at 484c/kg cwt, up eight cents, and the restocker indice was at 564c/kg, up 28 cents.

The NLRS said over-the-hook lamb rates also increased across all categories to start the year strongly, with highs of 550¢/kg cwt for trade weight lambs. Merino lambs made the largest gains, reaching 460-470¢/kg cwt on most grids.

The NLRS said numbers were back on the expect draw due to at least 35mm of rain in most districts. It was a good quality yarding with a good selection of trade and heavy weight lambs, and a better selection of Merinos.

“It has given producers an opportunity to hold sheep, where previously they were coming onto the market.

“The other thing is that a lot of sheep have left the western areas of NSW because it has been dry for a long time, so now those people are going to need to get more sheep or hold those they have,” he said.

“Those areas usually produce large numbers of sheep, they are not going to do that this year and I think that is leading to the shortage and then the price rises.”

But Mr Armitage said there is little or no store component in the mutton rates at the moment.

“It appears to me that the processors seem to have more money to pay for older ewes than restockers do.

“The processors are in front of the restockers at this stage on cast-for-age sheep certainly.”

The NLRS said the quality of the lambs was mixed with a good supply of trade and heavyweights. Not all the regular lamb buyers attended, however a new buyer operated on secondary trade lambs.

The market for trade weight lambs was generally cheaper for young and old lambs. Some of the old lambs sold firm to local butcher orders with the balance up to $12 cheaper. Quality variations were also evident in some price changes. Heavy lambs also sold to a cheaper trend, down $5-$10 with the heavier lambs most affected.

The sheep market was also firm to cheaper market trend. Restockers were active in the market for Dorper ewes and they purchased the highest priced sheep.

The NLRS said lamb quality improved slightly. There were more well-finished lambs and fewer plainer types. Most of the offering was heavy and extra heavy lambs. The usual buyers competed in a dearer market.

The NLRS said lamb and sheep numbers fell short of the anticipated draw following weekend rain. The lambs were mixed in quality, although there was a good selection of lucerne and grain-assisted slaughter lambs at the top end of the market. The regular buyers operated in a slightly dearer market for quality export and domestic lambs, with a pen of extra heavy shorn lambs selling to $176.

Competition for mutton was very strong despite one major export processor not competing and a stand-out pen of extra heavy Merino wethers in full wool topped at $140.60.

Restocker competition for light lambs remained buoyant at $70-$92 for better grown types, while very small and plain young lambs generally sold above $60. Restocking orders were from Boort, Rochester, Echuca, Wodonga and the local Bendigo area. Light lambs to processors mostly made from $75-$96.

Processor competition for mutton was very strong after sheep numbers fell below 8000 head. Heavy slaughter sheep regularly made over $100 a head, topping at $140.60 for a stand-out pen of Merino wethers in full wool and $122 for crossbred ewes. Medium weight ewes mostly sold from $78-$95, with plain conditioned and light sheep from $45-$60. On a carcase basis most mutton sold in a range of 340c/kg-370c/kg cwt, with odd sales higher.

The NLRS said quality remained very good across all lamb categories. Trade weight lambs and heavy lambs were well-supplied, with a better quality and heavier run at the top end of the weight range.

Lighter store lambs were also in reasonable numbers and sold to strong demand. All the usual buyers operated and most of the market sold to a dearer trend.

Mutton quality was good. Plenty of well-covered heavy weights were penned alongside a good run of medium weights that were mainly ewes. Prices were $5-$10 dearer on most lines. Medium weights sold from $68-$104 for the 3 scores and the heavy weight wethers reached $127. Most of the better mutton averaged 350c/kg-380c/kg.

Charles Stewart and Co agent at Ballarat Mick Madden said sheep turn-off has yet to be affected by rain.

“They’ve probably had a big clean out (of sheep) so suddenly the whole thing turns around now.

“I can’t see any reason why it would come back at all.”

The NLRS said the lamb market was slightly cheaper, however the sheep sold to dearer rates. The normal trade and processor support was present along with a small restocker presence. Unknown seed status again proved to be a factor in some pens’ easier sales.

The mixed quality sheep sold to very erratic competition from trade and processor buyers, with the sale trend generally cheaper. Light weight 2 score ewes to processors sold on a par with last week, from $50-$88, averaging 295c/kg cwt. The heavy weight 3 score ewes were hardest hit by the erratic prices, selling from $77-$102 and averaging 313c/kg cwt. Heavy weight wethers were in demand and they lifted $6, selling from $92-$120 to average 341c/kg cwt. Heavy weight ram prices slipped $5-$26 to $64-$100.

The NLRS said drying conditions and water shortages increased the yarding this week. Quality was mixed with some good trade lamb drafts and a reasonable supply of heavy mutton. Secondary and store drafts dominated, with large supplies of light lambs and solid supplies of light weight and conditioned ewes. Competition was variable with some buyers inactive at various times. Prices eased across most categories with only store lambs to feed holding firm.

Ewe prices began the sale at easier prices but firmed as the sale progressed. Light ewes made $30-$60, with restockers active at the slightly easier prices. The 2 score mutton sold from $50-$81, back $2-$4, for a 290c/kg cwt average.