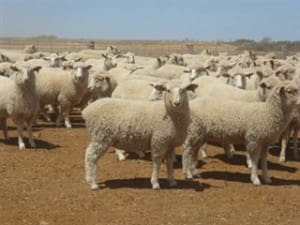 The National Livestock Reporting Service quoted the Easter States Trade Lamb Indicator at 457c/kg cwt last Friday, up one cent, and the heavy lamb indice was at the same level, down two cents.

The national lamb indicators were also generally in a positive trend, except for restocker lambs, down one cent to 455c/kg cwt and heavy lambs, down two cents to 454c/kg cwt. The other lamb indices are: Merinos 395c/kg cwt, up two cents; light 425c/kg, up 2c, and; trade 455 up 1c.

National sheep supply was 12pc lower, at 39,789 head, with all states except WA yarding smaller numbers.

The NLRS said lamb quality was excellent, with plenty of well-finished lambs. There were mainly trade and heavy lambs penned and mostly new seasons, with limited old lamb supplies. There was a handy supply of store lambs suitable for restockers. All buyers operated and competition was solid, resulting in a firm market.

The NLRS said numbers halved as harvest began in the drawing area. There were 2100 new season lambs penned and quality continued to be mixed. More lambs in the yarding showed signs of dryness, though there were still a few pens of better quality lambs offered. Most of the usual buyers competed in a dearer market.

Mutton numbers were made up of mostly Merinos and quality was similar to the previous sales. Prices lifted slightly with Merino ewes selling from $72-$102. Crossbred ewes sold from $80-$100. Merino wethers made $86-$112.

In Victoria at the Shepparton saleyards on Friday, the agents yarded 4950 lambs, 313 fewer than last week, and 1850 sheep, 30 more, for a good following of buyers.

The NLRS said quality remained mixed, but lambs overall were a little better despite many showing dryness. Demand was strongest for sheep, up $10-$12, and most lambs sold at firm levels with light restocking 2 score lambs $4 dearer.