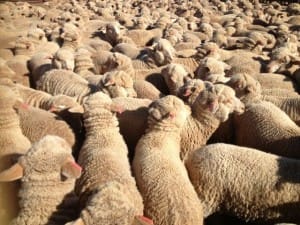 Meat and Livestock Australia’s National Livestock Reporting Service said the Mutton Index started the week at 333 cents, up two cents on last week; the Eastern States Trade Lamb Index finished at 474 cents, down three cents and the Heavy Lamb Index was at 477 cents, down five cents.

NLRS said lamb quality remained fair with good numbers of well finished lambs available along with the few plainer types. Prices fell $12-$15, and more in places, for the 7800 new season lambs penned for the usual buyers.

In Victoria at Shepparton on Friday, agents yarded just 550 lambs, down 81, and 138 sheep, down 15 and quality was very plain. NLRS said there were no new season lambs offered, with recent price falls deterring locals from selling.

The few pens of better bred lambs weighing around 24kg to 25kg sold to a top of $125, with the bulk of the lambs selling from $66-$110. The better quality slaughter lambs ranged from an estimated 420c/kg-470c/kg cwt. Any secondary lambs, particularly those with long dry skins, were discounted. The overall lamb offering struggled to average 400c/kg cwt when the plainer lots were included.

Agents said they aim to have their first feature yarding of young lambs from the Goulburn Valley area in a fortnight’s time. The few pens of ewes offered sold from $56 to $85/head to average an estimated 280c/kg cwt.

AuctionsPlus sheep and lamb offering up

Market operations manager Tony Benson said well-grown unjoined young ewes out of western New South Wales were the flavour of the week, selling from $132 to a top of $150 for November shorn 15-month-olds weighing 51kg out of Hay.
Scanned young ewes sold from $82 to $96, unjoined mixed age lines made $60 to $75, and scanned old ewes sold from $88.50 to $101.
New season Merino wether lambs sold well, in particular out of western NSW while last year’s drop experienced a tougher job.

BR and C agent, Mal Brady, for the wether lamb vendors AJ and VJ Lawrence, Burtundy Station, Ivanhoe, said the 5400 12.1kg-15.1kg carcase weight lambs averaged around $65, within a range of $61.50-$71.70. He said the season was starting to close in on the area, but the annual turn-off of wether lambs sold to mostly repeat buyers looking to grow out and shear them for May-June 2014 sale for slaughter. He said the Lawrences had been putting more emphasis on wool cut and muscle in their ram selection, but the expected rain also helped the sale.

AuctionsPlus also sold wether hoggets for from $52 to a top of $79 last week, for 45kg wethers with a big jacket out of Broken Hill, Mr Benson said.
“Store lambs were steady on last week’s prices.