Mutton and lamb barbecue is on the menu in Japan 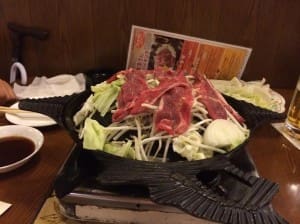 A love for barbecue and fine dining is boosting Australian lamb and mutton shipments to Japan.

For the first eight months of 2014, lamb consignments to Japan were 6882 tonnes, 27 per cent above the same period in 2013 and the highest since 2006, Meat and Livestock Australia has reported.

There was no change in the cut profile – Japan has predominantly been a shoulder market – but chilled lamb shipments during the month also increased, by 13pc to 498 tonnes — and frozen exports eased 13pc to 192 tonnes. About 10pc of Australian lamb exports to Japan are racks.

MLA senior market specialist for Japan, Miho Kondo, said the majority of lamb and mutton imported into Japan is used for Genghis Khan barbecue – a type of barbecue developed in Japan’s north island, Hokkaido, and popular among locals and tourists.

He said traditional Genghis Khan uses mutton and while lamb GK has recently been much more popular, there still is a niche but strong following for mutton GK in Japan. Back strap, shoulder meat and trunk meat are the major cuts.

“Mutton users had a tough time while Australian prices were extremely strong and the Japanese economy was very fragile, especially after the 2011 natural disaster, but the situation in the market had improved.”

Mr Kondo said while leg and mutton back strap are also used in the GK, shoulder is the most popular cut.

“Meat is sliced or cut in small portions prior to being cooked on the special GK BBQ plate, and eaten with dipping sauce or the meat is marinated prior to cooking,” Mr Kondo said.

“Although lamb was not part of the mainstream-traditional food culture in Japan, demand from the fine dining sector and high end retail is supporting rack exports.

“We of course would like to see this high end consumption to grow, on the back of Japan’s recovering economy,” he said.

“We have already seen the growth of rack shipments by 20pc so far this year.

“MLA will continue to work with local importers to create further demand for rack and other cuts.”

Mr Kondo said another important aspect of the Japanese lamb market is its high proportion of chilled products — 60pc of total shipments.

“With Japanese consumers’ appreciation for freshness and flavour, we continue to look after GK users, as well as developing new opportunities beyond GK.”

Mr Kondo said Australia now has a 67pc share of the Japanese imported sheepmeat market with New Zealand supplying 32pc, as of July 2014.

“Imports from New Zealand into Japan declined by 7pc compared with the same time last year.

Fletcher International Exports has been exporting mutton and lamb to Japan for many years. It was one of the first markets that owner Roger Fletcher exported to, FIE export marketing representative Andrew Hildebrandt said.

“We’re always looking to export more into any of our markets, though there is increased competition for the product from other markets these days and this puts pressure on the price that the Japanese importers can afford.

“That said, the products that are exported to Japan are mostly boneless, higher-end type cuts such as back strap, boneless shoulder and boneless leg – so they’re not immune to paying for higher quality cuts,” he said.

“The prices for sheep meat have risen considerably over the past 10 years or so which is putting more pressure on the price at the point of sale – especially when there is more competition for the consumer spend from beef, pork, chicken etc.”

Mr Hildebrandt said Fletcher’s brand has gained a very hard-earned reputation as a supplier of consistent supply, quality, specification and most of all safe, sheep meat products to Japan.

“So we are a supplier of choice to many importers.”

He said the Japanese economy has not been in the best shape, making development pretty tough as companies’ R&D budgets have been reduced and consumer spending has been lower also.

Mr Hildebrandt said though staffing levels were still tough, livestock supplies were improving for Fletcher’s plants at Dubbo, NSW, where he is based, and in Western Australia, near Albany, where the company’s second plant resumed a second shift this week.

“There are certainly benefits for many markets, especially Japan, with that increased production.

“The Japan market for us is a very important one,” he said.

“They are very fastidious when it comes to the specification and consistency of their products – which to me is great as it keeps providing new challenges for our people and products.

“Their high standards also have a flow on effect on all of our other markets – the quality of all products for all markets is produced to the highest standards possible,” Mr Hildebrandt said.

“We will keep supplying a large volume of product into the market for a long time as we’ve invested a lot of our systems and processes with the Japan market in mind.

“They will still have a strong demand for sheep meat as well due to the culture of eating sheep meat and there is certainly a push to preserve this culture throughout Hokkaido.”