The Murchison Regional Vermin Cell fence has been completed.

The completion this month of the Murchison Regional Vermin Cell means 55 pastoral leases are now enclosed with a wild dog-proof vermin fence that over time will enable a return to small stock production.

The final 285km leg joining the existing No 2 vermin fence and the WA state barrier fence was carried out by the Murchison Regional Vermin Council with $2.25 million in funding under the Federal Government’s Building Better Regions Project. An additional $750,000 was provided by the State Government and local governments.

“Livestock prices have skyrocketed and restoring small stock to the southern rangelands as an income source for local pastoralists will drive diversification across the region, creating new opportunities for shearers, livestock transporters and local contractors,” Ms Finlay said.

“The MRV Cell project demonstrates the benefits to industry and regional communities that result from strong collaboration with industry, state and federal governments and other stakeholders.”

For cattle producer and former sheep and goat producer Ashley Dowden, the project’s completion has been the culmination of two decades of lobbying for exclusion fencing to join up with the state barrier fence.

Initial funding was received under Royalties for Regions and Mid West Development Commission to start a 180km section but no further funding was forthcoming.

“We kept fighting and got all those inside the cell to agree to contribute, all the shires on board and willing to contribute and used that funding to leverage an application for a federal capacity building grant,” Mr Dowden said.

Although the grant application failed, Jorgen Jensen, as the Mt Magnet shire’s newly elected president, continued to successfully push for the project to become fully funded.

Mr Dowden is a former Mt Magnet shire president and former member of the WA Wild Dog Action Group and took on the project coordination role to supervise and manage fencing contractors, and clearing and materials tenders.

Wild dogs had almost wiped out his own pastoral enterprise, forcing a transition from sheep and goats to cattle from 2008 onwards.

“We had been running 10,000 Merinos and selling 3000-4000 goats annually – today there is literally two properties in that area running small stock and they have built their own exclusion fences,” he said.

“Pretty much the small stock industry has been wiped out and there has been a huge exodus of families and long-term contract musterers.”

Pastoral businesses have been in decline

An economic study of pastoral businesses within the proposed cell in 2012 showed the profitability of the stations had been in steady decline over the previous decade, the same period which had seen an explosion in wild dog numbers and attacks on livestock. Between 2000 and 2012 return on assets fell from 7.5 to -7.1 per cent despite significant improvements in commodity prices.

Pastoralists reported wild dogs impacting their Merino enterprises in the order of 40 to 75 per cent of the calculated deaths, causing a reduction in lambing of 30-60 per cent, and wool cuts by 20 per cent.

The average annual loss due to wild dog attacks per property was $90,490 and 55 per cent had ceased to run sheep due to predation. 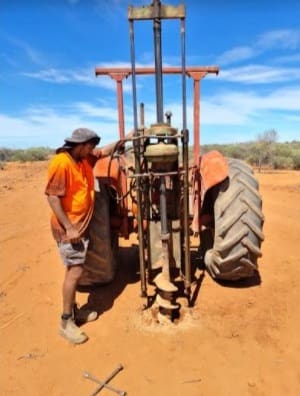 An application has been lodged with Building Better Regions Fund to use the savings to upgrade 38km of the No 1 vermin fence in the northeast corner of the vermin cell to replace a flood prone section over the next six months.

The length of fencing for the entire Murchison Region Vermin Cell is 1400km completed at a cost of $5.82 million with landholders and member councils contributing financially or in-kind.

Flow-on effects include environmental and biodiversity benefits with the region supporting 36 threatened species and the prospect of native vegetation regeneration, reduction in soil loss and increased carrying capacity.

Mr Jensen said the completion of the Murchison vermin cell would enable wild dog numbers to be reduced to the point of having no significant impact on livestock, allowing stations to rebuild their small stock enterprises.

“Pastoralists are acutely aware the completion of the cell will not result in wild dogs being reduced to insignificant numbers, but the solution requires the effective management of the parallel programs of strategic planning and monitoring, fencing, baiting, trapping and the implementation of new control technologies,” he said.