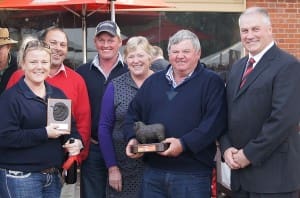 A favourable season, good classing and the right genetics has secured the 2013-2014 Elders Northern Supreme Clip Award for the Gray family of Moulamein.

Elders Melbourne show floor manager Mal Nicholls said the Grays take great care in their whole operation and pride in what they produce.

“While it is not one of the region’s biggest clips, it still stood out on sale day.

“Averaging 20.7 micron and with a tensile strength above 40Newtons/kilotex this clip was well-sought after by the buying trade when offered.”

The Gray family of Jeff and Lesley, with sons Scott and Adam, crop cereals and rice beside their flock of about 2200 sheep on about 3200 hectares at Moulamein, including 2000 irrigated hectares.

Their flock consists of 1700 Boonoke-blood breeding ewes joined to Merinos and about 500 classed out ewes mated to Poll Dorset rams.

Mr Gray said he had tried a lot of bloodlines, but kept coming back to the Boonoke rams. The ewes generally cut 7-8 kilograms of 21 micron wool annually. He was looking to lift the number of ewes joined to Merinos and phasing out prime lamb production, after seeing crop-only farmers suffer with frosts and poor seasons.

The flock was initially classed by Stewart Sizer from the 1980s, but this was now done by Elders’ district wool manager at Swan Hill, Andrew Williamson.

A good summer and autumn ensured sound wool for shearing

A reasonable summer and autumn last year helped keep the wool sound when the ewes were put onto pasture for lambing and wool classer  Elizabeth Tonkin from Melton also did a great job sorting out the various age groups mustered for shearing, Mr Gray said.

“Just being a small clip, we were real happy,” Mr Gray said.