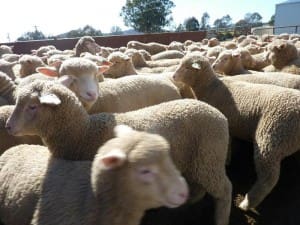 About 93 per cent of Cowra’s 7155 lambs were new season drafts on Friday, and just under half of Griffith’s 12,300 lambs were suckers, but domestic processor buyers showed a distinct preference for finished lines above 18kg cwt to ensure desired yields.

The ESDI for mutton was firm on Friday at 368c/kg, but down 6 cents for the week. The national mutton indicator finished on 367c/kg, up 1 cent.

The number of sheep and lambs listed on AuctionsPlus increased by more than 3000 to 36,893 last week. Queensland listings lifted by 9000 head to 13,774 sheep and lambs.

AuctionsPlus market operations officer Anna Adams said quality young breeders were the highlight of the week’s sales. First cross ewes sold to $185 and Merino ewes with lambs made to $204.

Large offerings of older ewes are hitting the market as their lambs are being weaned off. Older Merino ewes made $64-$130 to average $93. The top price was for unjoined 4-5 year-old late February shorn Wallaloo Park blood proven breeders out of Victoria, which reared 120pc of lamb this year. Younger 3-4 year old ewes averaged $134, while a large offering of young ewes ranged from $90-$154. The top price was paid for a line of 228 unjoined two year-old Merino ewes and for 132 unjoined three year-old ewes, all late February shorn, Wallaloo Park blood and two months off rearing 120pc lambs. A line of 165 unjoined 2.5-7 year-old late October shorn Egelabra blood Merino ewes with 200 Egelabra blood lambs made a top price of $204.

The sheep were mostly Merinos and quality was mixed. Prices remained similar to previous sales, with Merino ewes selling from $75-$124. Crossbreds ranged from $80-$125 and Dorper ewes sold from $92-$103. Merino wethers ranged from $92-$104.

The NLRS said lamb numbers lifted with the new season offering increasing to 6600. There was a limited supply of older lambs. Quality was very good, particularly for the heavy grades with extra weight offered. Mainly heavy weights were penned, along with trade weights and a reasonable supply of store lambs. All the buyers operated and competition was solid, resulting in a generally firm market, except for the extra heavy lambs which were dearer.

The NLRS said quality remained very mixed, with many small and odd pen lots still coming through as final drafts of old lambs are sold. The core group of regular buyers attended and prices were firm to dearer than a week ago, but this is based on limited quotes.

The market reached a top of $180 for a pen of heavy export lambs estimated to have a carcase weight of about 30kg. There was only a limited selection of new season lambs and quality was average, with most showing signs of dryness. Two pens of neater trade weight lambs, weighing an estimated 22-23kg cwt, sold for $140 and $149. Lighter weight young lambs generally sold from $92.50-$112, with one small pen selling to restockers at $71. The quality and finish of old season lambs was very mixed and the lower carcase prices were mainly for odd lots of a few head. The few better drafts of trade and export weight slaughter lambs sold from $122-$166, with just the one sale of extra heavy exports to $180. On a carcase basis prices showed a wide range, with the better types of lambs making from 550-600c/kg.

The sheep sale was dearer, most noticeably for plainer conditioned and light weight mutton. Heavy crossbred ewes sold from $90-$121. The general run of trade and light sheep sold from $60-$88.