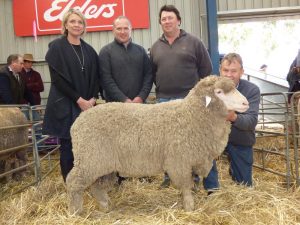 A MERINO ram with wool that can go anywhere was the talk and the toast of the Hamilton Sheepvention ram sale shed this week.

And the breeder, South Australia’s Moorundie Poll Merino Stud at Keith, received a $30,000 vote of confidence in their battle to breed high wool-cutting plain bodied fertile sheep, when the ram all but broke the sale’s $31,000 record price set in 2001.

On Monday, the first day of the two-day event, the stud won the Pen of Five Rams award for the sale rams in their first outing at Sheepvention and followed up by selling the stand-out sire in the pen for the sale’s top price of $30,000 on Tuesday.

The ram, Lot 141, was sold by Elders to the Glenlea Park stud at Pinnaroo, South Australia, and the Boorana Stud at Woorndoo, Victoria, with semen shareholders; The Mountain Dam Stud at Telangatuk East, Victoria, and the Leovale Merino stud, Lake Grace, Western Australia.

“A plainer-bodied animal is generally more fertile and faster-growing – and the battle has been to keep the wool cut on those plainer sheep.

“But like any selection process you find individuals in your flock to do it and it’s a matter of replicating those individuals to get more of them through your flock,” Mr Davidson said.

Four of their sale rams were grandsons of the elite sire Moorundie NE20 and the fifth, Lot 141 which sold for $30,000, was sired by NE20. The ram generated a lot of interest before the sale started due to the numbers of breeders looking to maintain or increase wool cut on plainer sheep.

“A lot people are chasing staple length, they are trying to get their wool cut on a plainer body through extra staple length.

“He’s got that extra staple length and that whiteness that can go into a lot of environments,” Mr Davidson said.

“I think when you get a good wool you can send it into dust and into rainfall.

“Often wools are specific to their areas, but I think his wool will go anywhere.”

“I question my own ability to collect information accurately enough to make the ASBVs relevant to my flock.” 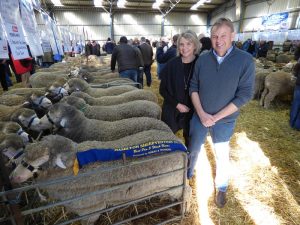 Mr Davidson said Lot 141’s fleece was almost one centimetre longer than his pen mates with the same shearing date and 1.5-2cm longer than the average staple length of other rams in the shed. He also liked the ram’s structural correctness. The ram’s fleece tested at 19.9 microns for the sale.

“Over the last 20 years, sheep have changed a lot, people have been looking to change the animals into a softer fibre – that’s the great thing that has changed, we’re getting these great knits and garments now from our better wools.

“And when you try to change your genetics in any one direction, you do tolerate problems; being a multi-trait animal sheep have got certain problems,” he said.

“But he is very correct on his feet, topline, muzzle and a good poll factor.”

Mr Davidson said a lot of people are mating poll rams to (horned) Merino ewes so they need a strong “poll factor”.

The Moorundie Poll stud has also concentrated on early growth, with clients wanting to turn off wether lambs at 8-9 months after shearing and achieving 22kg carcases.

“We’ve had a very big sheep traditionally, but this one (Lot 141) is more our modern type; it’s not quite as rangey.

“So the very big sheep, the good feed is getting them up and they are getting their 25kg (carcases) – but this type and shape (sheep) will probably get to the condition scores quicker and that’s what we are chasing,” he said.

“We’re chasing fat on our animals.

“There was always that trend against fat because they wanted a leaner loin chop, but fat is so important to your mothers, your lambing ewes.”

Mr Davidson said more genetically consistent Merinos Australia-wide that maintained their fleece micron under improved feeding regimens meant producers could now feed their sheep, with “good feeders” in South Australia testing at 21 micron, rather than 27 microns in past years.

Apart from keeping its genetics “right”, there were also a lot of “very old” management tools that could be fine-tuned to benefit the Australian Merino industry, Mr Davidson said.

“We’ve had three mobs of Merino ewes that did 150pc of lambs this year.

“It’s about having a type that can do it, but it’s also management; management is so critical,” he said.

“Understanding that a few lupins will get them cycling, a bit of barley at lambing time to keep the lambs alive.”

“A very bold crimping wool generally cuts a heavier fleece weight and he is exceptionally long stapled with it.

“His wool is very white and crimpy on a very loose free mobile skin which we believe can handle any environment,’ he said.

“He is structurally very good and with a very meaty back end — all those attributes in the one animal are hard to find.”

Mr Wallis said he was trying to breed Merinos for all environments, including summer and winter rainfall regions.

“We sell to very high rainfall clients as it is and because of that I am very mindful about the type of sheep we bring in.”

“He’s got a pretty elite wool on a great body, we hope it will help us out.

The 15 Dohne rams all sold for an average of $2416.67 and up to $11,500 for Lot 343 from Hamilton Run Dohnes, Jamestown, South Australia, paid by the Far Valley Dohne stud at Arthur River, Western Australia.

The five Corriedale rams offered by Blackwood Performance Corriedales from Evandale, Tasmania, sold to a top price of $2500 twice and averaged $1900.

Elders stud stock auctioneer Ross Milne said there was a lot of interest around the top-priced ram before the sale, there was more interest in top-end stud rams this year and new vendors had brought good sheep.

“Quality sheep always sell well in a quality environment and I think they were as good a quality rams as we’ve seen for a while.”