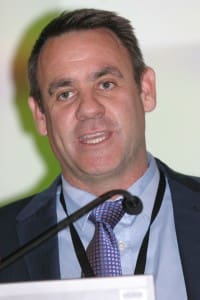 At the MLA Livestock Breeding and Genetics Forum in Brisbane last week, Mr Norton said such a move would increase value for sheep producers at the farm gate.

“And whilst both sides of industry from meat and wool have completely different strategies – and I wouldn’t say both sides do have completely different strategies, I think MLA, I think we have close to $10 million of MDC funding with Merino producers who have raised $5 million and matched it with MDC funding to do work around genomics and genetics in the Merino breed,” he said.

“I just think obviously if there is one sheep RDC, expenses for a start for delivering research would be addressed, and obviously then the whole industry would be working to one objective.

“It surprises me that the sheep industry – one side of the industry is supporting CRCs, one side is supporting sheep genetics, and the other side is completely opposed to it,” he said.

“We will probably sit here in 10 or 15 years’ time and work out who was right, but today we could actually work together and drive innovation  through the industry for at worst a dual purpose sheep.”

On whether a single sheep industry RDC would involve AWI taking over sheep meat research and development or MLA taking over wool R&D, he said it would be “industry’s decision.”

“I have said that is industry’s decision, industry can work out what it is, as an observer in industry it is frustrating trying to do projects where some of the iontellectual property is held by AWI, some is held by MLA, some is held by the Sheep CRC, etc when the average person would say, well just get on with it.

“You spend six months of a lifetime of a project working out can you get access to the IP held by various parts of the industry.”

Mr Norton believed the sheep industry was not making anywhere near the gains it could be if the sheep meat and wool sectors worked together under one RDC.

“In my opinion, yes.

“If the whole of industry worked together and pooled the resource funds, so that you could go out and in the next financial year only 20pc of MLA’s income for research and development would come from levies.

“The ability to go out and bring in commercial partners to help fund the research is the future of RDCs in this country,” he said.

“You can’t do that while it is disjointed.”