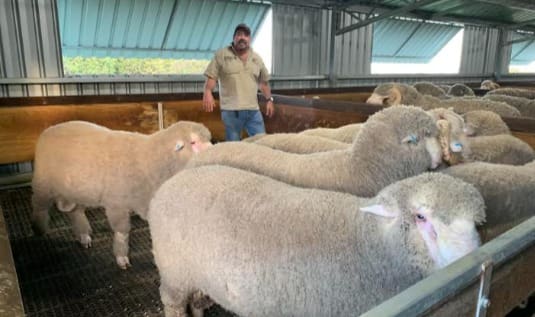 MEAT and Livestock Australia has been urged to continue its support for the National Wild Dog Action Plan’s co-ordinator role.

The Centre for Invasive Species Solutions National Wild Dog Management Co-ordinator Project is responsible for delivering the national action plan’s outcomes, by facilitating and maintaining partnerships across all levels of government and industry to reduce wild dog impacts.

However, MLA funding for the co-ordinator project is set to cease at the end of this month, with contributions from other funders, Australian Wool Innovation, and Animal Health Australia – via peak commodity council contributions – only fully financing the role for the first year of its next five-year cycle.

The deficit caused by the lack of MLA funding has prompted National Wild Dog Action Plan Co-ordination Committee member Scott Pickering to propose that the impact of wild dogs on red meat producers and the levies collected by MLA justified a continued contribution to the project. 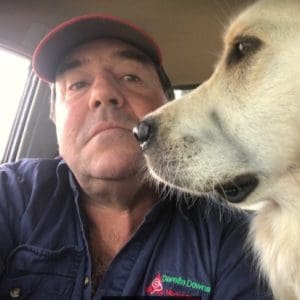 Scott Pickering with Golden Retriever Holly on the look out for wild dogs.

Mr Pickering said he moved a motion at the National Wild Dog Action Plan Coordination Committee meeting in Canberra last week to approach MLA to continue their funding of the co-ordinator project.

“AWI has done a great job in the past and they are still funding the Wild Dog Action Plan group, but it’s about time MLA stepped up and put some money up.”

“If wild dogs are costing cattle producers $60 million a year, surely MLA is losing money (due to wild dogs).” 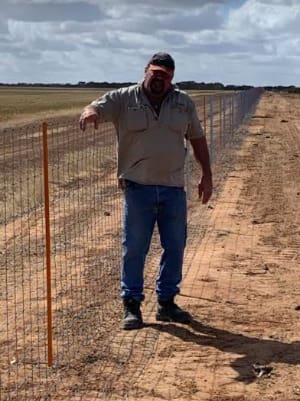 Mr Pickering said support from MLA was needed for adoption programs of wild dog best practice management. He said the plan had best practice extension material, but needed people in the field able to talk and work with growers to deliver on ground programs.

“This should be achievable through producer demonstration sites and be a key target for MLA through their adoption program.

“The National Wild Dog Management Plan co-ordinator has been pivotal in achieving on ground management in the rangelands, but further support will be required inside the agricultural areas where wild dogs are present and programs aren’t well established.”

“Ongoing support through the National Wild Dog Action Plan of the co-ordinator is still required.”

The National Wild Dog Co-ordinator was integral in generating cost benefit ratio between 6.1-16.5 to 1 increase in investment from the National Wild Dog Action Plan 2014-2019. In a review undertaken by Agtrans, it was found that for the $2.62 million invested into the plan by the Federal Government and net present value between $13.31 million and $40.68 million.

An MLA spokesperson said MLA was approached in May 2022 for potential funding opportunities with the National Wild Dog Action Plan, which includes the management co-ordinator role.

“MLA is considering this project through our well established consultation and prioritisation process with the research advisory councils and peak industry councils through the Red Meat Panel.

“These investments are considered in the context of all the top producer priorities that come from that process,” the spokesperson said.

The spokesperson said wild dog baiting, trapping and shooting “is not eligible R&D activity” but MLA recognises the detrimental impact wild dogs have on sheep, goats and cattle and the profitability of the red meat industry.

“MLA currently has two PDS projects in place in regional Victoria, where producers are implementing best management control practices for predation on sheep by wild dogs and other predators.

The spokesperson said MLA’s role moving forward is to invest in new methods for wild dog control, to drive the adoption of best practice wild dog management based on the latest R&D.

“MLA will consider those investments in line with the well-established governance process and in alignment with the industry and MLA’s strategic priorities.”

The spokesperson said MLA has significantly invested into wild dog research and adoption projects and continues to recognise the impact wild dogs can have on the livestock industry through its long-term and ongoing support of the Centre for Invasive Species Solutions.

Discussions with MLA are ongoing

Centre for Invasive Species Solutions chief executive officer Andreas Glanznig said although an MLA contribution has not been secured for the ongoing co-ordinator project’s next year and for years 2-5, discussions are ongoing.

“This is a strategically really important project and intervention by industry, and more broadly the government, through the National Wild Dog Action Plan.

“It’s a proven success through various evaluations and it is something that is seen as real flagship intervention compared to where we were well over a decade ago when there wasn’t widespread co-operative landscape-scale management of wild dogs,” he said.

He said the co-ordinator project has facilitated the emergence and promotion of cross-tenure wild dog management. 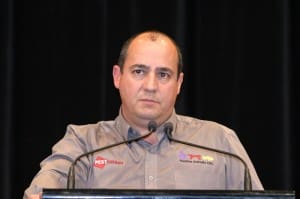 At the committee meeting last week, National Wild Dog Management co-ordinator Greg Mifsud said the role had been successful due to the network and relationships developed across a landscape scale from ground level to regulators.

“A key outcome of this project is that angst, animosity and frustration at a landholder level is taken out of the situation in most cases as people are much more informed and actively involved in the decision making at local, regional and state level.

“The project itself intersects across a range of the Centre for Invasive Species Solutions (CISS) programs covering national best practice, and collaborative pathways to accelerate adoption,” he said.

“Stakeholders tell me there is a significant role for the plan to provide the conduit between research, adaptive management and policy direction,” Mr Mifsud said.

“The plan does not control wild dogs, but is a strategic document providing the basis for and supporting the management on-ground whilst having influence in terms of ongoing funding leading to wild dog management.

“A lot of focus in the last 10-15 years has been in the sheep and wool industry due to the immediate impact of dogs, so moving forward there are opportunities to work on the impacts on the cattle industry and agriculture more broadly with demonstrations sites evaluating integrated multiple species management.”