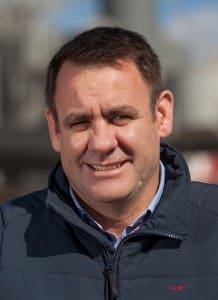 Meat and Livestock Australia managing director Richard Norton intends to continue his meetings with levy payers across Australia next year, after evaluating feedback from his current Queensland tour.

A spokeswoman said Mr Norton is very keen to visit other key levy-paying regions of Australia after his Queensland trip, to speak directly with producers and provide more transparency around how their levy is being spent.

Mr Norton attended consultative meetings in Rockhampton, Charters Towers and Georgetown last week, and will meet with producers at Longreach today, followed by Cloncurry tomorrow. He finishes his Queensland schedule at Roma on Wednesday.
The MLA leader has a full schedule until the end of the year taken up by the MLA AGM next month and taskforce meetings, but Richard aims to visit the other states from February to April next year. No set dates around these visits have been confirmed as yet.

Since starting in the role in June, Mr Norton has been at several industry events and peak council meetings across the country. This has included two trips to WA since June, to the northern rivers and Casino in NSW, Lambex in Adelaide, BeefEx on the Gold Coast, the NSW Farmers conference, the Ekka in Brisbane and senate commitments in Canberra.

Mr Norton said the consultative meetings are a chance for producers to learn more about the changes at MLA, where their levy is going and what the value is.

“MLA is committed to investing in the long term productivity and profitability of Australia’s cattle, sheep and goat producers to deliver long term benefits to industry, and by meeting face-to-face with our levy payers, offers the chance to provide clearer transparency around where each and every levy dollar is spent.”

MLA is also seeking feedback on a new consultation model to give levy payers a greater say in how their R&D levy is spent.

“Operationalising the new approach to industry consultation continues to be a high priority.

“I am continuing to listen to levy payers and industry to develop a future-looking organisation that delivers value to the farm gate and MLA is committed to delivering the support and services required by industry into the future,” Mr Norton said.