MLA managing director Jason Strong: It is now apparent that the NumOcaine vials are not tamper proof.

MEAT & Livestock Australia has withdrawn its support for releasing the Numnuts lamb and calf pain relief product NumOcaine from veterinary-only prescription after providing more than $5.2 million in funding.

NumOcaine, with its active ingredient 2 percent Lidocaine, is a key element of the Numnuts system for which MLA and Australian Wool Innovation provided research and development funding.

However, the discovery that a NumOcaine bottle’s unique quick change cartridge top — initially described as ‘tamper-proof’, but now ‘tamper-resistant’ – can be removed in under 10 seconds, has undermined MLA support for the product’s rescheduling from S4 to S5 status.

MLA has funded more than $5.2m to develop Numnuts, including $3.8 million funded through the MLA Donor Company, for further R&D and to support commercialisation of the system’s applicator. 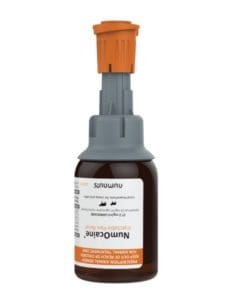 A NumOcaine bottle with its quick change cartridge.

An AWI spokesperson said AWI provided $76,500 for an early proof-of-concept collaborative project with MLA, plus a considerable amount of in-kind support and promotion. 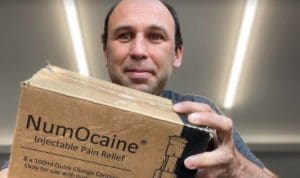 However, the Australian Veterinary Association is appealing the TGA’s rescheduling amendment. The AVA has provided the regulator with a short video showing how with the help of hot water and a spoon, the tamper-resistant bottle cartridge specific to the Numnuts system can be removed, improving access to the contents.

However, in October last year Meat & Livestock Australia withdrew its support for the rescheduling after finding out the NumOcaine bottles are not tamper-proof. MLA managing director Jason Strong told Bendigo sheep vet Tristan Jubb that MLA’s submission to the TGA was made on the assumption that vials of NumOcaine are tamper-proof.

“It was the considered opinion that the rescheduling would ultimately provide for better animal welfare outcomes over time.

“It is now apparent that the vials are not tamper proof and it is on this basis that MLA intends to withdraw its submission to the TGA,” Mr Strong wrote.

“MLA’s ongoing position on the rescheduling discussion is that MLA supports initiatives that provide for better animal welfare.

“The responsibility for decisions associated with public safety and the potential for misuse of available pharmaceuticals lies with the regulating authorities such as the Australian Pesticide and Veterinary Medicine Authority (APVMA) and the TGA,” Mr Beatty said.

“MLA’s focus continues to be on delivering impactful research outcomes to industry through our on-farm R&D programmes.”

The AWI spokesperson said AWI supports an S5 status for NumOcaine and it has made a submission to the APVMA consultation process.

On the initial TGA feedback form, Dr Schröder said: “Producer access to a local anaesthetic, in a tamper-proof vial that limits application to an appropriate rubber ring applicator, will allow castration and tail docking to continue as legitimate husbandry procedures, but with pain management, while less aversive alternatives (e.g. contraceptive vaccines) are being researched and developed.

“Failing to re-schedule lignocaine for this purpose will compel rural producers to depend on veterinarians that are often only remotely located, for access to prescription veterinary medicines,” he wrote.

“It is safe to assume that in such situations, most animals will not enjoy pain relief when subject to routine husbandry procedures.”

Dr Jubb has told Sheep Central he was hoping for a more definitive stance on the issue from MLA.

“What I was hoping was for them to say ‘we were wrong, we did not appreciate that it wasn’t tamper-proof’, but how could that be?

“They had such a big stake in the development of this device, how could they not make a re-usable device?”

He said anyone with strong hands can twist the NumOcaine-specific cartridge off, but there is even no need to remove the cartridge to gain access to the Lidocaine solution.

“All you need is to squirt enough out of the bottle (with the NumOcaine applicator) and suck it out with another syringe needle and go your hardest.”

The AVA has argued that giving Lidocaine/NumOcaine S5 status will make it more available for misuse, whereas Mr Smith believes the NumOcaine cartridge design specific to the Numnuts system and sale through rural sellers sufficiently mitigates abuse risk.

Dr Jubb said vet oversight enables demonstration of the product’s correct use and risks – toxicity and posterior paralysis — and verification of a user’s bona fides. This includes using a Phone A Vet app consult for existing clients before product is dispensed. Supply would cease if there was any abuse, he said.

“As soon as it goes online, all of that is gone – so it opens the floodgate.

“If it is bought online it could go anywhere and everywhere and there is no accountability – that’s really the major concern here,” he said.

“It’s a matter of the scale of availability and oversight.”

Dr Schröder is now working as a private consultant, and said he still stands by his initial TGA statement and supports Lidocaine’s rescheduling to S5. He initially called the NumOcaine bottle cartridge ‘tamper-proof’ “because that’s what initially we were told it was” and he was subsequently told it should have been described as ‘tamper-resistant’.

He said use of either of the NumOcaine bottle descriptions is “quite relative”, because with his pocket plier-knife implement he is able to take the top off a standard S4 multi-dose Lidocaine bottle with its “so-called tamper-proof” crimped on rubber stopper closure within 17 seconds.

“I would say it is a weak argument.”

In his initial TGA submission, Dr Schröder said the community and consumer expectation is that producers should improve the wellbeing of the animals in their care, as shown in numerous MLA-funded consumer surveys over 10 years or more.

“Replacing painful with non-painful husbandry procedures is a big issue at the moment.

“Failing an alternative, refining current procedures, e.g. by administering some form of pain management, is a logical next step,” he said.

“Customised local anaesthesia in the form of a device/system such as Numnuts is a valuable innovation.

“Numnuts is not the complete or final answer, e.g. the duration of anaesthesia is too short, but it is a quantum leap from what was available before, which was nothing,” he said.

“A large percentage of sheep producers are not regularly serviced by veterinarians, thus eliminating them from the process of adopting pain management more widely.

“For all the reasons above, a buccal formulation of an NSAID (only meloxicam currently registered for sheep in Australia) under S5 is also logical,” he said.

WoolProducers Australia chief executive officer Jo Hall said the WPC stands by its original submission to the Therapeutic Goods Administration in support of the rescheduling of Lidocaine to make this product more freely available to wool growers.

She said the WPA also strongly opposes the AVA’s proposal that the current Schedule 5 listing of 2pc injectable Lidocaine (for use in lambs and calves) be removed from the Poisons Standard.

“The decision of the TGA, as published in September 2021, was thorough and supported the delivery of significant industry benefits through the increased adoption of the use of pain relief products when undertaking the prescribed husbandry procedures.”

“Farmers require easy access to pain relief chemicals so that they and their contractors can undertake the necessary husbandry procedures to provide for good lifetime welfare outcomes, and this is why Sheep Producers Australia supported the product to be classified as an S5 in October 2021.

“Sheep Producers Australia firmly believes that the TGA made the right decision to reclassify the product to an S5 and to reconsider its earlier decision would be detrimental to animal welfare outcomes,” she said.

“Whilst no risk can be completely eliminated with regards to chemicals and poisons, Sheep Producers Australia believes the construction and design of the NumOcaine product and applicator makes the product difficult to abuse.

“Sheep Producers Australia queries why the proposed amendments to the Poisons Standard are being reconsidered by the TGA, given that the TGA made the decision on the current classification, and in light of the recent application providing no new information.”

Non-mulesed wool supply facilitator Peter Vandeleur from New Merino said the safe and effective Numnuts innovation to administer local anaesthetic to lambs for castration and tail docking is a huge step forward and will win support from animal welfare organisations that are keeping a critical eye on wool production practices in Australia.

“While we understand that in excess of one million doses have been safely administered by farmers, this represent only approximately 2pc of the lambs marked annually.

“We believe that one reason for this low adoption is that currently Lidocaine is only available through veterinary practices,” he said.

“This is inhibiting its uptake and hence limiting the animal welfare benefit as well as the opportunity to create a positive reputation for the Australian industry.”

The RSPCA Australia has also supported the rescheduling of Lidocaine, with senior scientific officer Melina Tensen arguing that this would allow greater uptake of the NumOcaine technology, “providing a significant welfare improvement for the millions of lambs and calves subjected to painful castration and/or tail docking each year.”

The NSW Poisons Information Centre at the Children’s Hospital at Westmead said its support for Lidocaine’s rescheduling is dependent on the product packaging being specific to a a device with a set dose of 1.5ml for injection.

“The bottle should not be substitutable into another injection device, which may allow injection of larger doses.

“Accidental doses of Lidocaine could pose a serious poisoning risk.”