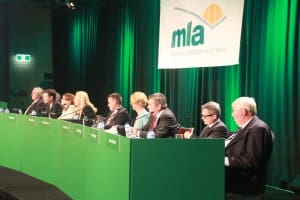 The MLA board at yesterday’s AGM in Sydney.

The changes will see a reduction in the number of MLA directors on the Director Selection committee and an increase in the number of directly elected grassfed representatives.The changes are the result of the passing of two special resolutions proposed by MLA to amend the Constitution. Special resolutions require 75 percent of the vote to be passed. The results were:

Members also voted on the election of Directors to the MLA board. The election results were: