IT was a mixed bag for the wool auction market and thin volumes were traded on the forwards early in the week, followed by a Friday flurry.

The forward market although thinly traded early in the week traded 48 tons Friday morning. The premiums being paid attracted grower across the New Year maturities. The emerging interest being shown by growers is understandable when looking at the last twelve months range and the longer-term percentiles. The 19 micron contract traded at 1680 cents in January, February and April 2022. That represented a 44 cent or 2.6 percent premium to the closing spot auction market (1636 cents) and in the 70th percentile on the 11-year chart. The spot auction market high for the last 12 months is 1643 cents. It last traded in excess of 1680 cents in March 2020.

These are all positive signs for the market moving forward, but highlight the value of placing certainty on a portion of next year’s clip. January and February 2022 continue to be bid at 1670 cents. Solid levels (1650 cents) are also being offered for 19 microns into the first half of 2023. 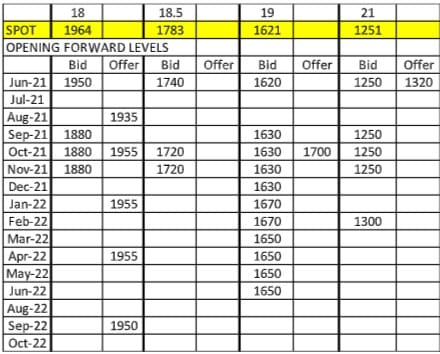