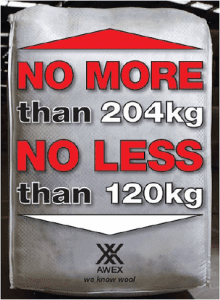 CONCERN that growers will not conform to the introduction to a new minimum bale weight for most wool grown in Australia until next year has prompted a reminder from the Australian Wool Exchange.

Single bale lines of speciality superfine fleece wool (ASF4 or better), 18.5 micron and finer may have a minimum gross weight of 90kg, which remains unchanged.

AWEX chief executive officer Mark Grave said it is too early to determine if growers are already moving to the new 120kg minimum bale weight.

He said according to AWTA tested bale weight data there seems to have been a modest move higher in bale weights, but the real test will come from January 1.

“Up until now the past year has been about getting the message out and hopefully wool growers, classers and industry personnel start to get the message and are prepared.

“Unfortunately our concern is that most will not act until they have to – January 1,” Mr Grave said.

“The bottom line is that nobody wants light weight bales – everyone wants more wool in the bale.

“There are some very efficient and productive wool growers who would average 185-195kg per bale this change is about lifting the minimum to improve efficiency and reduce costs through the supply chain.”

Mr Grave said the consequences of not conforming to the new minimum bale requirement are the same as current for anything less than 110kg.

“Most wool will be rehandled through a bulk class which can be expensive.”

To ensure that the introduction of this new minimum weight is well known and understood, AWEX is urging all stakeholders to talk to their wool grower, wool classer and shearing contractor clients about the change and how they might achieve a more productive outcome when shearing.

Bale weight stickers for the wool press are available for distribution from AWEX and the Bale Weight Calculator App is free and available to be downloaded from the Apple App store https://itunes.apple.com or Google Play https://play.google.com/store/apps