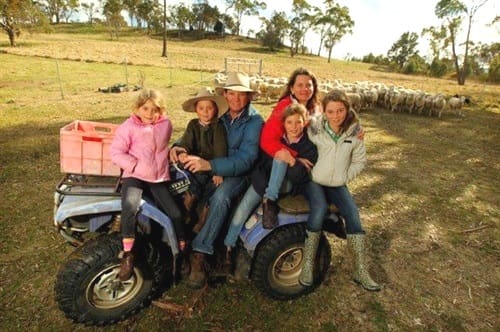 Peter and Sally Strelitz and family started Milly Hill near Armidale in 2008.

Milly Hill earned the champion open lamb exhibit award for an exhibit from the class-winning 24-26kg open lamb class. The same exhibitor also won the 2012 President’s Medal for the overall champion exhibit, as well as gold medals last year and in 2011.

A family-owned business based near Armidale in the New England district, Milly Hill specialises in the supply of premium quality, wholesale free-range lamb throughout South East Queensland and New South Wales.

Peter Strelitz, who established Milly Hill Lamb with his wife Sally in 2008, said they were excited to win the award a second time, despite being a small company in a large industry.

He said maintaining the standard of their product had always been of utmost importance to them. The company started as a local home-delivered ”lamb-in-a-box” business but has grown to become a direct supplier to quality restaurants and butchers across Australia’s eastern seaboard. As demand for premium lamb grew both locally and interstate, Mr Strelitz recognised the need for a lamb brand exemplifying excellence in quality, consistency and reliability.

The formation of a value chain with stringent specifications today provides Milly Hill Lamb with access to specialist breeders and growers who dedicate their best lambs to the program.

With a hands-on approach from the paddock to the plate, the Strelitz’s continue to personally select many of the prime lambs for the brand, and meet regularly with chefs and restaurateurs to hear firsthand how their product is performing.

Also featuring on the Sydney Show winners list was South Australian producer, J A Malone & Co who clinched the champion grassfed lamb exhibit award for their Malone Lamb entry from the 24-26kg class.

Malone Lamb has been grown on the family farm near Naracoorte since the 1940s. Naracoorte, in South Australia’s Wrattonbully region, is renowned as one of the best prime lamb farming regions in Australia.

Chief judge Derrick Casey said the Sydney competition this year showcased an exceptional level of quality across all exhibits.

“The quality in entries was excellent. Nearly 30 percent of the entries in the lamb competition, from both grassfed and open classes, scored gold medals. This is a real testament to the quality of product being produced at the moment,” Mr Casey said.

“I’ve seen over the last two years in particular, a continual improvement in the product we’re judging. It is obvious that the producers, growers and the whole supply chain are taking more notice of what the public and the trade want.”

“It is good to see this sort of consistency in the quality of lamb that is coming out of Australia,” he said.