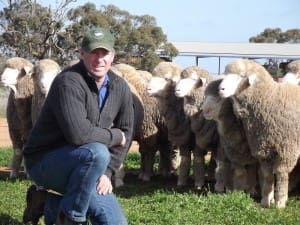 MerinoSelect sheep recordings have increased by more than 50 per cent since 2010 as commercial breeders demand objective data when buying rams, according to the Sheep CRC.

And Sheep Genetics offered a free ‘try before you buy’ service for ram breeders interested in learning more about MerinoSelect.

“MerinoSelect has now reached a critical mass that proves this technology is being widely accepted as something that works well and should be part of breeders’ decision making process when selecting rams,” Mr Chandler said.

MerinoSelect is delivered through Sheep Genetics, the national genetic evaluation services for the Australian sheep industry, which calculates ASBVs for recorded sheep. ASBVs provide breeders an estimate of the genetic potential a sheep will pass on to its progeny for a range of economically important traits. ASBVs account for the environmental effects, allowing a comparison of sheep based on the genes they will pass on to their progeny.

“We are also hearing reports of ram breeders having new clients come to them looking for rams with breeding values, and then returning year after year because they can see the impact that those rams have had in their breeding programs.”

Riverina breeders Stephen and Carol Huggins, of Woodpark Poll Merinos, joined MerinoSelect three years ago to take their flock benchmarking data to another level, having previously provided clients with their own sire indexes.

“We have definitely grown our business because we have joined MerinoSelect,” Mr Huggins said.

“Part of that has been because we have been out and about at field days with our sheep and discussing with producers what the ASBV figures mean.

“But there have also been some commercial breeders who have proactively asked for that extra level of information and have really utilised it ahead of auction day and private selections as they seek sheep with strong figures for specific traits.

“The sheep still have to stack up visually as well – the difference is we’re now providing another layer of information that’s helping breeders make better decisions.”

Gathering MerinoSelect data not an issue

Mr Huggins said gathering the animal measurements needed to join MerinoSelect was not an issue, as they were already collecting large amounts of data about their flock, including parentage, fleece weight, fibre diameter, and weight for age.

However, he sought assistance from Sally Martin Consulting for preparing the data for submission to MerinoSelect, and from Craig Wilson & Associates in interpreting the data to improve their own selection decisions at joining.

“There is a process for collating the data into the format required by Sheep Genetics so that MerinoSelect can provide meaningful information back to sheep breeders,” Mrs Martin said.

“The process can vary slightly from flock to flock, so we assist ram breeders in preparing a calendar for collecting the information that fits in with their existing management activities.

“We discuss some of the tools that are available to assist with data gathering, such as electronic identification, and then help producers put that information into a format that fits with Sheep Genetics requirements as well as into a format that is useful and meaningful for their commercial clients.”

Advice on how to join MerinoSelect is available www.sheepgenetics.org.au More information on how producers are using ASBVs as part of their breeding program is available at www.sheepcrc.org.au