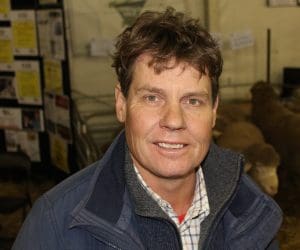 Sheep Central understands Mr Judd resigned his position this week after details of the focus group of MERINOSELECT breeders run by Axiom Research on June 15 were made public on the sheep industry news website.

Mr Judd is the manager of AWI’s genetics and reproduction portfolio and was responsible for overseeing the focus groups as part of a research project exploring breeder and wool grower attitudes to flock improvement using genetic tools.

The AWI program manager for genetics and reproduction has refused to comment on his resignation and will finish up at AWI this month. However, Sheep Central understands the circumstances of the focus group session contributed to his decision, along with personal reasons.

An AWI spokesman has previously said only that AWI and the facilitators were aware of Mr Merriman’s presence at the meeting. Mr Merriman has said he informed Mr Judd that he wanted to go to the meeting, but was told he couldn’t.

Trigger Vale Poll Merino Stud principal Andrew Bouffler said he had no doubt that the sheep genetics focus group research being done by AWI was worthwhile and “absolutely justified”. He only found out after the focus group session that the market research was also being overseen by Mr Judd.

Mr Bouffler said he was disappointed to hear of Mr Judd’s resignation “because he did everything right.”

“This wasn’t set up for Wal to sit behind a screen and observe what his competitors are doing in their breeding programs.

“Later on I found out, that from AWI, it was Neil Judd and Wal (in the adjacent viewing room),” he said.

“It makes perfect sense for Neil Judd to be there; it was his project, his spend and the company Axiom Research did tell me that that happened on a regular basis,” he said.

“They were very surprised to find out that the chairman was behind there (the mirror) …. they just didn’t declare it.

“I would be disappointed if Neil wasn’t there, it was his project, it was his spend and it’s for market research,” Mr Bouffler said.

“It makes perfect sense for the company paying the money to have an operational person there observing the workshops.”

Judd ‘thrown under the bus’

“It shows a distrust in his own staff, to a point, doesn’t it? If he can’t leave that to Neil Judd, where does Neil stand in that position?”

Mr Dewar believes Mr Merriman has done a “massive job” for the industry in his position.

“But he is out of line in this scenario, without a doubt.”

Mr Dewar said he was disappointed for Mr Judd.

“I think he has been thrown under the bus.”

Karbullah Poll Merino principal Mark Murphy said he “had a lot of time” for AWI’s general manager of research Dr Littlejohn and also respected Neil Judd, but did not know how he got involved in it.

“I’m assuming he was just an employee told what he had to do.”

He also believed the researchers Axiom Research would have had to “toe the line”.

“They won the contract to do the job and will obviously do it to the best of their ability, but I think they would be severely compromised in how they would present their end of the deal.”

Mr Bouffler, a Nuffield Scholar and graduate of the Australian Institute of Company Directors’ course said he initially couldn’t believe it when told by Leahcim Merino Stud breeder Andrew Michael after the meeting that Wal Merriman had been seen entering an adjacent room and “could have been behind the mirror and probably was.”

“I was a bit taken aback. It was pretty ordinary and I was a bit annoyed with the process,” he said.

He said right at the end of the meeting the breeders started talking about governance issues at AWI, and AWI’s direction around genetics, and the levy spend split between on-farm research and development, and marketing. Mr Bouffler personally believes growers would “get more bang for their (levy) buck” from productivity and on-farm research than from marketing.

“I personally don’t think that they (AWI) really are doing a good job governing for all stakeholders in all things – it seems both the capital and human resources of the company are increasingly being diverted towards marketing activities.

“It is not surprising that the tone of the company and the broader industry is set by the AWI chairman and the marketing-focussed board which are clearly not into innovative genetic research and development.”

Mr Bouffler said the high percentage of marketing articles and lack of stories on “hard core innovative genetics” in AWI’s Beyond the Bale publication reflected the attitude of the board to the industry.

“It just reflects through the whole company, the lack of real passion and drive and spend on the segment of industry that is doing it… and that’s reflected by the drop of spend out of Sheep Genetics, the genomics program and the Bred Well Fed Well workshops.

‘Elephant in the room’ is leadership

“The reality is; however, that this project is more of a validation of the tools we already have rather than an investment in developing future tools like genomics.

“I thought, why are we pussyfooting around here, the elephant in the room is that it starts right at that leadership level,” Mr Bouffler said.

“I said this in the meeting: I’ve done the Institute of Company Directors’ course and the take home message in a sentence was: a good chairman and a good board, set the strategy, set the tone of the company; they have ‘noses in, but fingers out’ of the operational aspects of the company.

‘Noses in, fingers out’ is a long-standard rule of thumb for boards of directors and the organizations they govern in relation to dealing with management and staff.

“I said as much in the workshop and to later find out the chairman was watching us through a one-way mirror certainly backs up my comments,” he said.

“It seems from the outside and from the feedback you get that they (the AWI board members) are far too operational; time and time again staff and the operational part of the organisation is compromised,” he said.

“That it was conducted with some people in the room and some behind glass observing is not a normal occurrence and a practice AWI will not be undertaking again,” the spokesman said.

Click here to read what the Australian Institute of Directors says about ‘noses in and fingers out’.