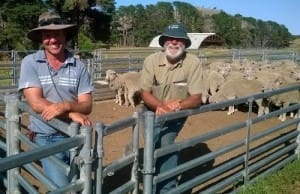 Ruffy Merino and Hereford breeders Tim and Rob Hayes have won the 2016 Victorian Flock of the Year Award.

MERINOS that balance wool cut with frame have won the 2016 McLennan-McColl Flock of the Year competition for the Hayes family at Ruffy in north-east Victoria.

Father and son team Robert and Tim Hayes accepted the 2016 award after judging of the eight flocks was finalised last Thursday.

The Hayes’ winning 2500-ewe Borambil-Hazeldean blood flock is run on the family’s 1500ha Ruffy property, which is also home to their registered Tarcombe Hereford herd.

Co-judge of the event, formerly of the One Oak Merino stud, Graham Wells said the winning flock had a balance of body and wool, with stated fertility which was “right up there”. He said at the current state of the industry, the most earning capacity lay with sheep that combined wool cut with meat and fertility.

“The quantity was better than the quality, but the quality was apt in that type of sheep,” he said.

The Hayes used Hazeldean rams for many years before switching to Borambil sires and Mr Wells said the cross was giving the Hayes a good balance of body and wool cut.

“It’s been a great cross – to hold where they are is probably the challenge for them.”

Second place in the competition went to J.M. Gross of Molka and third place was taken by Tom Wren of Tungamah. The encouragement award went to J.H. Wall and Sons of Gowangardie.

The competition was organised by the Royal Agricultural Society of Victoria in partnership with Merino Victoria. Co-judges were experienced Merino breeder and former Vice President of the Australian Stud Merino Breeders Jock MacRae and Daniel Rogers, 2014 RASV Young Australian Sheep Breeder of the Year. They agreed the selection was a difficult process given the high standard of entries in this year’s selected region of North-East Victoria.

Rob Hayes said that he, along with his family — wife Jan, son Tim and daughter-in-law, Cindy, were thrilled to win the award.

“We are passionate about Australian wool and promoting the strength of the industry to the upcoming agricultural youth.

“We were pleased to show our sheep and promote the Merino breed and it is a great honour to receive this award,” he said.

“A big thank you must go to Rex Bennett of Elders Rural Services for his support, RASV, Merino Victoria and all sponsors for promoting the Merino sheep.”

The competition is named in honour of two of the Merino industry’s most well-respected, wool producer, Neil McLennan and sheep classer, Keith McColl. The award celebrates and assists with improving the quality of Victoria’s merino ewe flocks and was this year supported by North East Merino Group, Elders Rural Services, Peter Davis Rural and Landmark.

Other entrants, fellow producers and interested parties were able to view entrants’ production systems and learn best practice management with competing properties open over the days of judging.

RASV chief executive officer Mark O’Sullivan said the competition was indicative of the organisation’s commitment to providing valuable and credible opportunities for agri-food and fibre producers.

“Australia is renowned for quality merino wool production and this competition highlights the outstanding quality of flocks in Victoria.

“This on-farm commercial competition is an important element of our sheep program along with our blue ribbon competitions at the Royal Melbourne Show in September,” Mr O’Sullivan said.