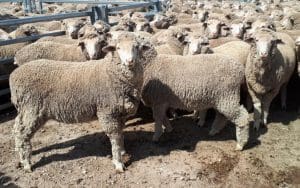 The 2016-drop MerinoLink progeny in the Merino Lifetime Productivity trial.

ECONOMICALLY important fleece and carcase traits in Merino sheep will be under the spotlight at the MerinoLink inspection and field day in southern NSW this week.

The field day at Temora on Friday, October 27, will present the latest visual and objective assessment of the 2016-drop progeny in the Merino Lifetime Productivity Project.

Visitors will also be treated to a DNA sampling demonstration, flock profiling information session, trade displays of sheep handling equipment and a wool marketing update by Marty Moses from Moses and Son.

The 2016 MerinoLink Lifetime Productivity Project is an evaluation of 13 Merino sires, including two link sires being assessed at other MLP sites, allowing a greater pool of data to be collected.

A total of 1250 Merino ewes were artificially inseminated in January 2016 at the Temora site, and lambed down in small mobs to accommodate the nutrition requirements of single and multiple births.

The ewes were randomly allocated to sire groups based on body weight, condition score and the Merino Production Plus Index.

Lambs were weaned in August 2016 onto grazing crops at an average liveweight of 31.3kg. They were visually and objectively assessed at 10 months of age, with ewe progeny to remain at the Temora trial site for adult measurements of wool, carcase and reproduction traits.

Ms Martin said the Temora trial site would provide data on an extensive range of production attributes, allowing the industry to more accurately assess the components making up lifetime productivity.

“The project ultimately aims to demonstrate in a commercial environment the cost benefit relationship of measuring multiple adult traits through the lifetime of an animal,’’ she said.

“It has been designed to answer questions on the impact of selection for growth, wool production, reproduction and carcase traits, and the predictions surrounding superior lifetime productivity.’’

The field day will be held at “The Vale’’, Temora, (20km from Temora on Goldfields Way or 10km from Barmedman towards Temora on the Goldfields Way), from 12pm to 3pm, with a barbecue lunch available.