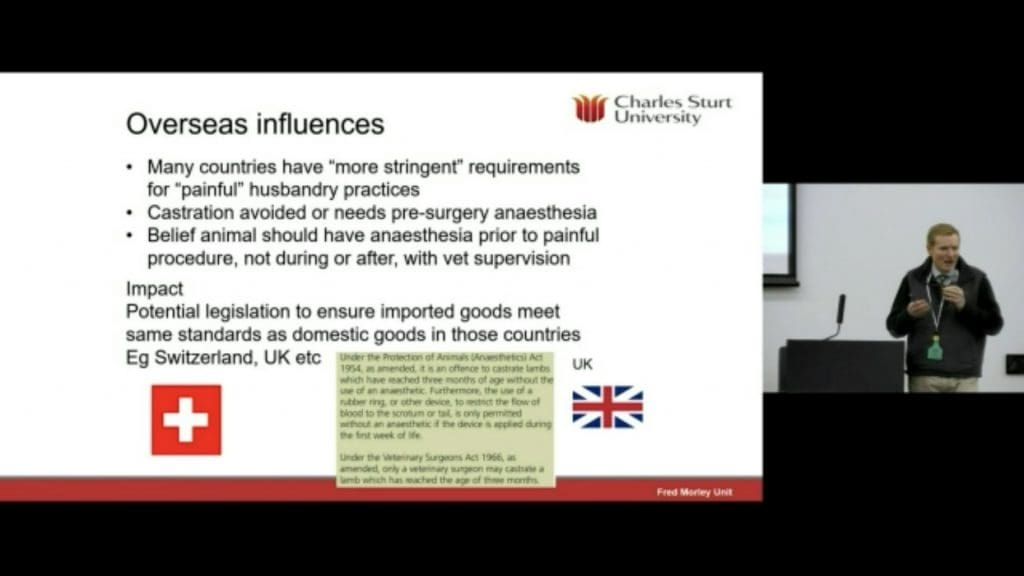 AUSTRALIAN sheep producers were given a ‘heads-up’ on potential international trade trends relating to animal welfare at the 2021 MerinoLink conference last week.

He told the sheep producers at the conference they need to be aware of increasing social licence and traceability demands, and not necessarily via legislation, but from overseas countries reacting to consumer animal welfare expectations.

“The critical thing is that sheep, lamb and wool are premium products.

“Consumers buying premium products have increasing expectations about our products and how they are produced, and one of those expectations is around how we are handling our animals,” he said.

“I think probably the biggest change that has occurred over the last five years is now, not whether or not, but the need for pain relief when certain animal procedures occur.

“And certainly in Australia, mulesing has been the real driver for that and in a way it has helped us lead the world in some of the things that we are doing,” Prof Allworth said.

“But you’ve got to note that anaesthesia associated with castration is mandatory in other countries that we are selling our products to.”

Legislation ‘irrelevant’ in the face of market forces

Professor Allworth said in regard to animal welfare, producers worry mostly about whether there will be legislation against current farm practices.

“I see that one way or another, as producers, we will be under increasing pressure over how we handle our animals, whether or not that’s regulated is largely irrelevant,” he said.

Professor Allworth said that although Australia’s animal welfare standards and guidelines have been harmonised nationally, the issue is that it is up to each state to legislate.

“So as you know Victoria has mandated pain relief with mulesing, that isn’t mandated in other states.”

“This is the sort of thing that is now driving action against (on) animal welfare.

“This is purely around animal welfare practices and the aim is to get up to Tier 1 and each year , people (companies) who register on this can either progress, stay where they are or fall behind, and they’re all included in the report,” he said.

“So these companies, which are the major food and fibre companies in the world, are under increasing pressure to show there they’re sitting in terms of their response to animal welfare,” he said.

“That feeds back to producers who are dealing with them.

Should Australia be comfortable it does things differently?

“In terms of overseas influences, you may well say that we run things differently here in Australia, doesn’t really what happens in Europe.

“They are our customers and we had an interesting meeting the other day which WoolProducers Australia (and the Department of Foreign Affairs and Trade) organised with the Swiss,” he said.

“And the issue that they pointed out to us is that they have regulations that require their producers to operate under certain animal welfare requirements, which are much higher than our requirements, and they are then wondering why they are allowed to import products into their country that have come from animals of a lower standard.

“A bill actually went to their Parliament last year, it got defeated, but it’s going to go again, to ban imports from countries that don’t meet the domestic standards – I mean, if you are in Switzerland, that is just logical isn’t it? Prof Allworth said.

“But it is not very palatable from our perspective.”

Professor Allworth said there might only be eight million people in Switzerland, but he believed WoolProducers was organising similar meetings with other countries, including Germany.

“And there are a lot more people in Germany,” he said.

“This is the sort of influence, whether we like it or not, that we are going to becoming under, so we are going to have to respond to that and make sure we are ahead of the game.”

After the conference, Professor Allworth said the initial Swiss legislation was not about differentiating countries on specific animal welfare practices, but whether importing countries should meet the same standards as required for production in the country.

“For example, if a producer in Switzerland produces meat and he has to use a vet to castrate his animals, is it appropriate that meat sold in Switzerland from animals that are castrated in Australia, but haven’t had a vet administering the pain relief?

“This was nothing about mulesing, this was all about them looking at what practices were happening outside the country to see whether it aligned with what they were making their producers do and if it didn’t, what they most interested in, and the critical point out of the meeting with the Swiss, was  the traceability of our products,” he said.

“About 90pc of the discussion was about ensuring that we had adequate traceability, so if they decided that a practice that we were doing – and it was mostly likely around a painful procedure such as castration and absolutely mulesing would be included – but it wasn’t a discussion about whether or not be should be mulesing.

“It was discussion about any painful farming practice.

“We can’t just look at ourselves and say that we are doing a better job.

“We’ve got to be aware of the pressures on other producers around the world which will directly impact on us sometime in the future.

“I think forewarned is forearmed, we can’t rest on our laurels,” Prof. Allworth said.

He said it is important that Australia communicated with its overseas customers to ensure they are happy with our animal welfare practices.

It is likely that Australian sheep producers will have to consider the market implications of their animal welfare practices in wool or sheep meat production, he said.

“If we want to sell our products into countries that have higher standards than us, it logical that over time those countries might get jack of dropping their standards on their imports.”

He said if one country decided to legislate against products produced under lower standards, he agreed it was logical that other markets would follow suit. Similar conversations were being held around the Australia-United Kingdom Free Trade Agreement, Prof. Allworth said.

Pain relief is now an expectation

“The sorts of practices that are being targeted are around mulesing, tail docking, castration, potentially ear tagging and ear marking, and shearing cuts.

“And in terms of health, lameness is the really big one, probably a bigger problem in Europe than here at the moment, but it’s certainly the major one, and obviously things like preg tox and major injury.”

Professor Allworth said the Australian Animal Welfare Standards and Guidelines for Sheep list standards and guidelines that sheep producers need to be aware of these – using the words ‘must,’ and ‘should’, which indicates best practice.

“And often these things that say should are then put into the integrity things such as SustainaWOOL or RWS (Responsible Wool Standard) or something selling meat through.

“From this, I think we can conclude that provision of pain relief is now an expectation for some of our routine procedures, not all of them, and we actually need to even assess the need to even undertake those procedures.”

Professor Allworth also outlined the world-first Australian Sheep Sustainability Framework, which was given its first general public launch at the conference.