Merino wool growers – it’s time to prepare for the recovery 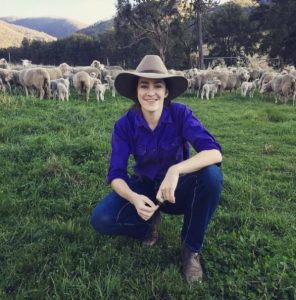 NOW is the time for Merino producers to prepare for the industry’s recovery and produce sheep that can be accredited as non-mulesed, don’t require heavy chemical use and grow high quality premium-priced wool, according to Natasha Favaloro.

Natasha, 20, is a final year Bachelor of Agriculture student at the University of New England’s Armidale campus and has written an essay for a wool marketing and clip preparation unit that sums up her views on an issue that has polarised the industry.

Natasha’s father Paul is an SRS sheep classer and with his wife Jane run a commercial flock of SRS Merinos in high rainfall country near Tamworth, New South Wales. But Natasha maintained her opinions from her practical experience from working on other “non-SRS” properties running a range of Merino types.

“I’ve formed my own opinions … I’ve watched people jet-dipping and  dealing with flies and all the rest and  I’ve seen the proof of a better alternative.”

The Favaloros turned to breeding SRS Merinos in 1994-95 to limit flystrike and stopped mulesing in 2004.

Into the breech, a naked tale

To a growing rank, the term ‘wool production’ is not synonymous with ‘animal welfare’, except perhaps to claim a distinct lack thereof.

It should not be said that wool growers and people within the wool production chain have a disregard for animal welfare or ethics and are driven only by the capital potential from wool production; but rather, that those within the industry have a greater understanding of the health and ethical implications of wool growing. 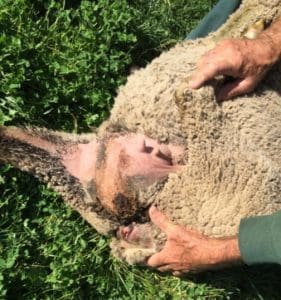 The minefield of animal rights groups’ concerns about mulesing is not entirely unfounded and for those of us who have seen the light, the inclination towards cessation of mulesing is not insignificant. Even with the implementation of integrity schemes, ranging from some acceptance of mulesing – SustainaWOOL — to no acceptance — New Merino, NATIVA and ZQ Merino — just to name a few, the wool industry as a whole still faces strong concerns and boycott campaigns from the international community and welfare groups.

This problem is perhaps perpetuated by Australian Wool Innovation’s original stance; their bold unfulfilled statement claiming a total ban of mulesing by 2010 causing distrust that the Australian sheep industry can and will in fact pull it off. Indeed, just two months ago the bill for a (mulesing) ban by 2022 put forward by the Animal Justice Party was passed over; the NSW Government taking a “no budging” stance to the concept.

Of course, (NSW Minister for Agriculture) MP Adam Marshall is not without grounds, there is more than enough controversy surrounding wool production and the use of “wool growing machines.” Submission on this issue will likely open the floodgates to “an attack on a multitude of routine agricultural activities”. This is hardly an inaccurate statement; the agriculture industry has long faced scrutiny over practices that are as unavoidable as they are unattractive.

Mulesing so often becomes the face of what is wrong with the sheep industry, because it is a visible treatment that is easily and often photographed. Anyone sensitive to animal suffering would be more distraught at the sight of a heavily fly-struck sheep though and would likely be aggressively calling for a ban on thick-skinned sheep prone to such atrocities. We can hardly blame those that fight so valiantly for their cause. The use of ‘propaganda’ and selective misinformation has been the weapon of many, before animal rights groups.

Research into the histology of the wool follicle is not a new concept, indeed Dr HB Carter had established the effects of thin skins reducing blowfly strike in 1937. There is ample proven science behind the benefits of plain bodied sheep and very little to refute it. So why is this a continued area of resistance?

Do not misunderstand it as a lack of interest into the welfare of sheep, certainly mulesing is done just for that reason, but the idea that high fleece cuts must be maintained to ensure a sustainable income is indoctrinated into the thinking of many a wool grower.

If you ask anyone in the sheep industry, the wool market has taken a dive almost unprecedented and the lamb market is flourishing. Therefore, arguably there could be no better time to cease chasing the high wool cut and instead focus on getting as many lambs on the ground as possible. In doing so furthering genetic gain towards a sheep that does not require mulesing.

At this time when there is no real money in wool growing, now is the opportunity to stop chasing the pipedream, fix your sheep, and get ahead for when the industry recovers, coming out the other side with sheep that can be accredited as non-mulesed, not requiring heavy chemical use and growing high quality wool at a premium.