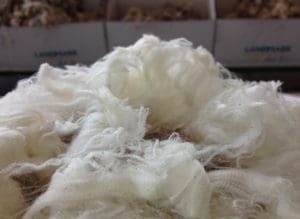 AWEX senior market analyst Lionel Plunkett said it was worth noting that, due to currency movements, the EMI in $US terms rose 14 cents to US1437c/kg clean. Brokers passed in 7.8 percent of the 42,519-bale offering, 2937 more than last week, and including Tasmanian wools in Melbourne.

“Noticeable, was the fact that wools carrying slight faults, started to receive smaller discounts as buyers focussed more and more on length and strength results.

“Main interest was again focussed on wools with very low mid breaks and wools possessing Cvh values below 45,” he said.

“These lots are becoming increasingly difficult to quote, as some buyers adopt a “buy at best” attitude in the sale room.

“The opposite was true of wools with high mid-breaks, these wools were heavily discounted, and the increased quantities of these types was a large factor in the Micron Price Guides recording falls.”

Mr Plunkett said the crossbred sector, for the first time in many weeks, managed to out-perform the Merino offering.

“General price increases of 5 to 15 cents were felt across the board, helping the EMI from falling further than it did.

“Buyer interest was again centred on the better prepared lines, earning these wools the greatest price increases,’ he said.

“The eastern markets managed to post rises for the week.

“However, the western region lost ground, resulting in the three carding indicators reducing by an average of 9 cents,” he said.