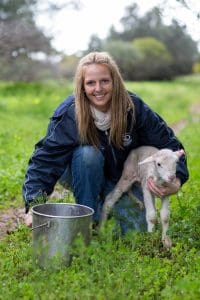 Jessica Crettenden has been researching the effect of grazing on wheat performance at the Minnipa Agricultural Centre.

MERINO sheep in a nine-year South Australian cropping trial have been shown to improve productivity and profitability, particularly in a higher input system, with no apparent negative effect on soil or system health.

The trial at Minnipa, on South Australia’s Eyre Peninsula from 2008 to 2016, found incorporating livestock into the rotation increased nitrogen (N) cycling and water use efficiency, reduced weed and pest populations and had no negative effects on cereal performance, while value adding to stubble and pastures through grazing.

The high input grazed farming system had a gross margin of over $100/ha/year more than lower input and ungrazed treatments over the nine-year trial period. Grazed treatments appeared to have lower snail and mice populations, increased ground cover outside of the growing season and reduced summer weed height and density.

SARDI researcher Jessica Crettenden at the Minnipa Agricultural Centre, ran the broadacre trial with a wheat-medic rotation to test whether productivity could be improved under a higher input system (eg. higher fertiliser and seeding rates, establishment of improved pasture) compared to a lower input and more traditional system (district practice seed and fertiliser inputs, volunteer pasture), and what effect this had on soil fertility.

A basic economic analysis of the study showed that over nine years, grazing contributed $328/ha to the low input treatment and $725/ha to the high input treatment. Ms Crettenden said $274 and $651 of this was attributed to grazing medic in the pasture phases, with the remainder attributed to grazing the wheat stubbles over summer/autumn in the low and high input grazed systems respectively.

“The low input system had minimal costs in the pasture phase years (only herbicide application) — the ungrazed low input system made a $66/ha loss in total, while the low input grazed system off-set these costs by grazing livestock, making a total profit of $208/ha.”

Ms Crettenden said the higher input system produced 1.25tDM/ha more medic biomass overall in the pasture phase of the rotation (2010, 2012 and 2015) and grazing reduced total biomass by 0.25tDM/ha on average.

“The grazed systems carried a total of 2303 and 5232 DSE grazing days in the low input and high input systems respectively during the three years of medic pasture and grazing wheat stubbles over the summer/autumn period.

“Total mineral N was similar for high and low input systems; however, the grazed systems had considerably more soil N on average (17 and 13kgN/ha greater in the low and high input treatments respectively).”

There was an average of 11mg/kg more extractable phosphorous in the low input system, compared to the high input treatments. Soil organic carbon remained steady throughout the lifetime of the trial, with similar results across all treatments.

Results pertinent to other cropping areas

Ms Crettenden said soil compaction was measured one year, with no differences between treatments, and any supposed compaction had no negative impact on productivity.

She believes the findings from this trial are pertinent to cropping in other low rainfall mixed farming areas.

“Other enterprise types, soil types and rainfall regions may vary, but the concept of sheep being beneficial to the whole farm system would be a common finding I think over many cropping areas across Australia.”

Ms Crettenden also believes there would be great value in repeating a similar trial in other areas of Australia.

“Unfortunately there is not much long-term trials undertaken in mixed farming areas so this is something that would be quite beneficial to occur.”

“This meant that running sheep added a $51/ha profit per annum to the conventional (low) input, ungrazed system, while adding higher inputs earnt an extra $49/ha.

“Including both sheep and higher inputs to the conventional system earnt an extra $155/ha,” Ms Crettenden said.