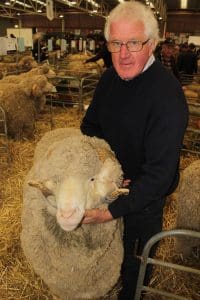 In a sale indicating renewed stud and commercial Merino confidence, breeders paid up to $32,000 each for three rams and another made $30,000.

“People are talking about joining all Merino rams and not joining any crossbreds to tail-end sheep.”

Elders stud stock advisor Jim Bruce said changing the sale date from Monday to Sunday had increased the crowd and created more interest in the rams.

“There is plenty of interest in wool and in livestock breeding businesses at the moment, so everything contributed to a buoyant atmosphere, I think.”

Mr Bruce said the real winning statistic of the sale was the multi-vendor sale’s 82pc clearance.

“I think it would be a fair measure of breeding industry confidence and we are seeing that in multi-vendor sales for cattle as well.

“The breeding business is buoyant, people are looking to breed more Merino ewes and so they want to breed good ones,” he said.

“This sale and the sale at Hamilton early next month will probably be strong barometers for demand at the spring Merino ram sales.

“We know that at a lot of the on-property sales we will be running, the vendors are motivated to meet the needs of their clients who are looking to grow and in particular improve their flock.”

He believed holding the ram sale on a Sunday also helped the result and it augured well for the Hamilton Sheepvention sale next month.

“People who would normally pack up and go home on a Sunday have hung around and maybe had a crack at buying a ram.” 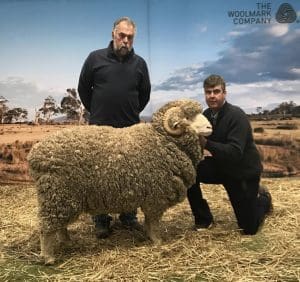 The first ram to make $32,000 at the sale was Lot 3, an August-shorn 12 month-old 17.8 micron Langdene ram from the Dunedoo stud in New South Wales, that was bought by I. and C. Greenwood of Yass, NSW.

“There was definitely more interest this year from the whole industry.

“With the spike in the wool market, current prices and the prices of sheep and lambs, people haven’t seen it better.”