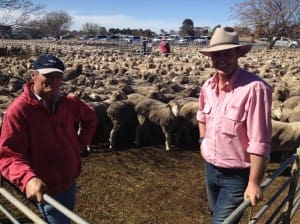 Merino ewes sold to $196 at the huge Hay annual September sheep sale last Friday, with even second-run ewes selling well to keen restockers from across NSW, northern and central Victoria.

The top-priced line was 403 March-April 2013-drop and August-shorn Alma blood Merino ewes from ‘Yarto’ at Booligal, bought by Geoff and Diane Allan, ‘Melrose’, Mathoura. A second line of 400 made $172.

Mr Allan said the Yarto offering last year was bought by a neighbour who wasn’t buying this year, so he stepped in and he would join the 72kg ewes to Retallack Border Leicester rams in the first week of October.

Agents quoted the sale generally solid for the 55,000 sheep yarded – believed to be Australia’s biggest sheep sale – but Mr Allan said some lines sold cheaper than last year and he was expecting ewes to make over $200. Last year’s top price was $204 for Yarto ewes.

Elders Hay agent Bruce Summers said there wasn’t a dull moment in the sale of what was a fantastic run of well-bred sheep. Prices for young ewes at close to $200 and wether lambs to $80 were to expectations despite the very ordinary season at Hay.

Buyers for the joint Elders and Landmark offering came from Deniliquin, Griffith, Echuca, Barham, Swan hill, Bendigo, Forbes, Narrandera, Kaniva, Inglewood, Yarrawonga, Albury, Kerang, Mildura, Wagga, Cowra, Kyneton, Kilmore, as well as all major processors. Most restockers were looking for ewes to join in October, or through to December and later in the south.

Solid sale ‘all the way through’

Landmark Deniliquin’s Bill O’Brien said the sale was very solid “all the way through” for the number of sheep, with the second top-price being $188 for Daisy Plain’s 400 March-April 2013-drop Alma blood and July-shorn Merino ewes.

“Then prices dropped back to $172, and probably for the next eight to ten pens, you might have thought they would make a tad more, they were making between $155-$175, but still very good bloomy sheep.”

“Anything with bloom was chased for and made the money.

“I suppose the trade might have taken half of them.”

He said about a third to half of the wether lambs – the freshest – were bought for slaughter, with most making $60-$70.

“I thought it was really good money.

Mr Braybon said the Abbaotsford operation from Ivanhoe sold the best of 2000 April-May 2013-drop and August shorn Collinsville blood Merino ewes for a top price of $168, with the seconds making $136 and the thirds $126. This compared with $100 for the third run of ewes last year.