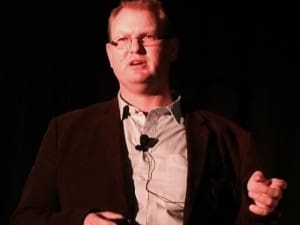 AUSTRALIA’S Merino ewe flock was seriously under threat, but its pure female progeny could be “worth gold” while numbers remain low, BestWool BestLamb 2015 conference delegates have been told.

Mr Trompf raised the prospect of Australia’s need to lift sheepmeat output to maintain market share in some of its major markets, but said the lack of maternal information that could help improve production was “unbelievable.”

“In the Merino industry less than 10 per cent of those farms with studs that are in MerinoSelect will provide you with a Number of Lambs Weaned (NLW) figure.

“Why is that? We’ve got to match lamb and dam together in order to get that,” he said.

“Half the maternal flocks that are in there don’t provide a NLW figure.”

“The maternal information is gold in our industry, we talked about the technology earlier, but it is all about attitude; that is what governs what is going to happen in this industry.”

Mr Trompf said with some technological assistance — in the use of electronic identification and sensors outlined by a previous speaker — commercial producers would lead the march in providing the data needed.

“If we can start collecting on-farm data, commercial data, and validating what ewes are functioning in our environment, that’s what is really going to crank that up.”

So where is Australia’s breeding ewe flock at?

Mr Trompf said Australia once had 80 million breeding ewes, but this had plateaued out around 2008 to the current figure of about 42 million ewes.

“What has happened since that time is that Merino proportion of that population has continued to decline at the same rate as it had been previously.”

Mr Trompf said the decline in the Merino ewe flock before 2008 was driven by bad seasons, cropping and other pressures on the general sheep population.

“At the end of the day it means since that time (2008) we have lost 2 million Merino ewes per annum to ewes of another breed or non-Merino ewes.”

“And one of the states that is leading the charge is Victoria – we now have 50-50 flock of Merino and non-Merino ewes.”

Mr Trompf said the change in the ewe flock had been driven by the sheepmeat industry. Gross returns per head from sheep had increased from wool and sheepmeat, but now less than half of Merino ewes were being joined to Merino rams.

The trends in reproductive rates for the various ewe types in the sheep industry meant that by 2016 less than one third of the ewe lambs born in Australia will be pure Merinos.

“The first thing that says to me is those that stick in Merinos, breed the right Merino with the right balance of genetics and present it to market well as surplus ewe might be riding a cash cow into the future.

“But that will depend on that animal being the right animal, otherwise that displacement will continue,” he said.

“Those that have been buying in Merino ewes and their system has been based on that….I’m concerned about their ability to continue to acquire that ewe at a cost-effective price.”

Self-replacing systems “the way to go”

“The depreciation costs on the ewe will mean you may not be able to afford to run sheep at all.

“Particularly as soon as this year if we get any sort of a spring, hold on for a ride with the surplus ewe values.”

Mr Trompf said a Merino’s ewes lambs are “worth gold”.

He said based on the net price for Merino lambs at $3/kg for meat after the cost of production, the value of an extra Merino lamb is $26.

“And those lambs are worth even more in a maternal system,” he said.