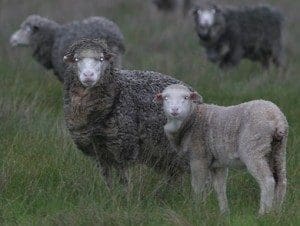 Sheep producers in hard-hit areas of New South Wales and across the country are selling off their young and older Merino ewes — including ewe weaners – to fund the feeding of their most productive and fertile wool sheep.

Some ewe pregnancy scanners recorded higher multiple lamb pregnancy scanning results in NSW flocks earlier this year, but in Victoria more light sheep are being presented and results overall have been average.

AuctionsPlus reported that Merino ewe listings doubled to almost 14,000 in the last week of May and Wagga-based Elders senior production adviser Rob Inglis said if New South Wales and Victoria did not get sufficient rain this weekend then producers would be forced to sell more breeding stock.

“If we don’t get some relief in Victoria and southern NSW this weekend, it will precipitate another sell-off.

“We are already seeing a lot of stock sold now that wouldn’t be sold until October or November,” he said.

“If it doesn’t rain they will be eating further into their breeding flocks.”

Mr Inglis said the dry conditions have also now lowered the condition score of ewes in many flocks, placing at risk the ewe and her lamb, especially multiple-bearing ewes.

“Up to this stage the lambing has been quite good and the ewes have held their condition quite good, but now that ewes are hitting peak lactation, it is really pulling them down and they might start to walk away from their lambs.”

Mr Inglis said there have also been reports of NSW flocks with large numbers of ewes suffering from pregnancy toxaemia and hypocalcemia.

Western New South Wales producers are starting to “dig into their flocks quite heavily”, he said.

“We are seeing significant culling in Merinos – the four to six tooth ewes will be the last ones to go.”

Mr Inglis said the hogget ewes being culled are also not necessarily being sold to restockers, but are going to the currently insatiable mutton trade at prices of up to $5/kg cwt.

“Because they are in better condition, they are attracting better money and a lot of them are going to the kill.

“A lot of those potential breeders are now going to processors unfortunately,” he said.

He has heard of a case where scanned empty Merino ewes were sold for almost $200 at the Wagga Wagga saleyards and hogget ewes were bought for $125, “because no-one wants young ewes.”

“Producers are not prepared to pay $150 for a scanned in-lamb Merino ewe at the moment – the store market is just dead.

“It might change this weekend with a general rain, but there is just a small portion of the south-east that has feed.”

Mr Inglis said in areas of Victoria where there has been rain, most producers have gone to composites and crossbred.

“I suspect the composite, crossbred and Dorper flock might be maintained, but I fear the Merino flock will see some further shrinkage.”

The ABS recently released flock numbers for the 2016-17 financial year, which showed a higher than anticipated year-on-year increase of 6.8 percent – mostly attributed to stronger marking rates. This significant increase in the flock has led to some adjustments to MLA’s forecasts, setting the scene for flock expansion and higher turn-off in coming years.

But Mr Inglis said he would be staggered if these previous flock gains were not eroded significantly this year.

“I have clients out at Broken Hill, the few sheep they are retaining, they are not joining them anyway, because it is too tough – I suspect the lambing percentages in Merinos will be well down on average across New South Wales and into Queensland.”

Mr Inglis said with heavier finer wool cuts in Merinos being antagonistic to lamb survival and numbers of lambs weaned, this might mean the current wool boom is “a bit of a poisoned chalice.”

NSW sheep slaughter the highest since 2009

MLA’s market intelligence manager, Scott Tolmie, also said the tough summer and the absence of an autumn break, particularly across most of NSW, has challenged producer intentions to maintain or expand the size of ewe flocks.

“NSW sheep slaughter for the first quarter was the highest it’s been since 2009,” Mr Tolmie said.

“The projected flow-on effect is a delay in the expansion of the national flock, with numbers now expected to remain stable at around 72 million in June 2018.”

With the upwards revision to slaughter, production volume forecasts for 2018 have been adjusted higher. Lamb production for 2018 is forecast to reach 524,000 tonnes carcase weight (cwt), up 3pc year-on-year, while mutton production is expected to lift 2pc, to 192,000 tonnes cwt.

Mr Tolmie said ongoing dry conditions have limited the ability of many producers to expand flocks, despite both sheep meat and wool prices remaining near historical highs.

“For the first quarter of 2018, national lamb slaughter tracked 4pc higher than the same period last year, at 5.8 million head,” he said.

The rise was driven by greater numbers processed in NSW (up 9pc) and Victoria (up 14pc) – partly the result of absorbing some of the lost capacity from a major plant closure in South Australia, but largely due to the tough growing conditions.

Sheep slaughter for the January to March period was up 9% from year-ago levels, to 2.1 million head.

Mr Tolmie said despite increased slaughter, the Eastern States Trade Lamb Indicator (ESTLI) remains above the five-year average, albeit below the levels seen at the beginning of the year.

The ESTLI averaged 613c/kg cwt for the year-to-April, back 4pc on year-ago levels. However, at these levels, the Indicator remains historically high, up 17pc on the five-year average for the period.

Lamb prices in the west have outperformed the eastern states so far in 2018, with the WA trade lamb average price for the year-to-April up 6pc or over 30c/kg on year-ago levels. In fact, trade lambs in WA have traded at a premium to those in the east for only the second time since 2015, MLA said.

Mr Tolmie said with many producers relying heavily on supplementary feeding, carcase weights for the first three months of the year have held up well, remaining firm on year-ago levels at 23.1kg nationally.

“Lamb carcases in NSW recorded a 5pc increase year-on-year, offsetting declines in other states, averaging over 25kg in the first quarter of 2018,” Mr Tolmie said.

“However, sheep carcase weights tracked below 2017 levels across all states for the March quarter. The national average was 2pc lower than last year, at 23.6kg.”