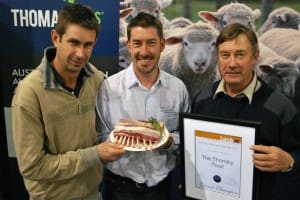 The Thornby rack in the 26kg-plus class was ranked above its competitors — for appearance and texture before cooking and as a cooked product for juiciness, aroma, flavour, tenderness and overall liking — by a judging panel led by Derrick Casey, the chief operating officer for hospitality education institute, Le Cordon Bleu.

Thornby Grain Fed Lamb joint owner-manager Paul McGowan said he, his brother Alex and father John and a few employees at the dinner were stunned by the win. Paul said the win was a real team effort by family members and the four fulltime and one casual staff members. He dedicated the win to his late mother, Helen, in recognition of her contribution to the operation from the feedlot to the customer.

“It was nice to get that recognition particularly after my mother passed away a few months ago.

“She was a big driving force behind the feedlot in getting rations, animal welfare and management practices right, and she understood the customers.”

Paul attributed the Thornby win to the ability of grain-feeding to produce a consistent result, rather than the lamb’s breed background.

The winning rack was from a 29kg-plus lamb bred on their Coonalpyn property from a Prime SAMM ram and a South Australian Merino dam. The lamb was finished for 50 days in the family’s 7000-head capacity AUSMEAT-accredited feedlot at Sanderston, chilled for 10 days, slaughtered at the Two Brothers abattoir at Lobethal and prepared with butcher John Hill at Thornby Fine Meats, Tanunda.

“The butchers did a great job,” Paul said.

Paul estimated the winning lamb had a live condition score of 3.5-4, prompting him to suggest perhaps processors needed to reassess their focus on lean lamb.

“Basically the judges are saying that for eating quality the consumer likes a fattier lamb, whereas processors are telling producers to go for lean meat yield,” he said.

“You need that marbling in there and that’s what wins it.”

“We can get our lambs up to a saleable quicker using this breed.

”They perform so well in the feedlot too – they adapt well to grain.”

The McGowans also buy in another 22,250 lambs off farms – preferably Prime SAMMS — for their feedlot. They supply domestic branded product customers and an order of 400 27kg dressed weight lambs a fortnight for Thomas Foods International for the Japanese market. A quarter to a third of the feedlot turnover are Prime SAMM cross lambs.

Paul said he wanted to investigate lamb eating quality selection to improve carcase quality. He also intended to use electronic tags to track lambs from feedlot entry to the abattoir to collect carcase quality feedback and use this to select preferred lamb sources.

The Lambex win was the second competition success for the McGowans. Two years ago Paul drove a Thornby entry all the way to the Sydney Fine Foods show, returning with a silver medal.

Paul said he wanted to explore new marketing options for the Thornby brand, but also to work with processors and butchers on relating consumer experiences to defining a good eating quality lamb.

“I think the future is working with the processors a bit more, highlighting the fact that it is not all about getting lean meat yield – that is actually not bad to have a bit of fat on them,” Paul said.

The Australia’s Best Lamb Competition was open to any commercially available branded product and  entries came from major processors and several lamb brands across Australia.