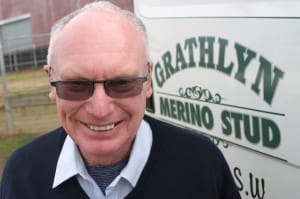 Not even an old truck that refused to start without the help of some jumper leads could dampen his thankfulness for good fortune.

His Grathlyn Merino stud had just sold a ram, the Supreme Merino Exhibit of the show for $25,000, at the Bendigo ram sale after the Australian Sheep and Wool Show.

But that wasn’t the only reason for his good humour, despite a recalcitrant truck and the prospect of a 10-hour drive home to central west New South Wales.

“The truth of it is that Gai and I have been married 37 years and heading to 38 – we had a rippin’ good show in Sydney, we had a wonderful show.

“Our eldest son Sam and his wife Olivia gave birth to their second daughter three weeks ago, we’ve basically scooped the pool in Bendigo 2014 and our youngest on Andrew and his wife Brooke will give birth to another child for us in December 2014,” he said.

So I reckon it could the best Christmas ever at Grathlyn and the most memorable year for Gai and me in our lives.”

Max and Gai’s son Andrew said he didn’t think the family would ever have another show like the 2014 event. “It was beyond belief and exceeded all expectations we had when we left home.”

The 17.1 Grathlyn ram topped the Bendigo sale at $25,000 and was bought by a syndicate of buyers led by Alan McCormack, Walwa stud, Gurrundah, NSW. Other members of the syndicate were the Demondrille stud, Harden, NSW; the Hillcreston Park stud at Bigga, NSW; the Conrayn stud at Berridale, NSW and the Merrignee stud, Boorowa, NSW.

Mr McCormack said the ram stood out for his size, skin and wool quality.

“When one of the better sheep ever produced in Australia or the world comes up you have got to have a sale in him.”

Joint sale agents Ruralco, Elders and Landmark sold 92 of the 122 rams offered, for an average of $3461.

A Coddington Poll ram, Lot 2, also sold in the sale for $20,000 to Bathurst breeders Paul and Jill Blanch.