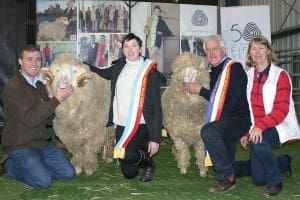 Rock-Bank Merino Stud’s Crawford family, from left, Sam, Nicole, John and Rhonda, with their supreme Merino ram and Supreme Australian Merino Ewe of the Year at Sheepvention this week.

VICTORIA Valley’s Rock-Bank Merino stud principal John Crawford likes winning at shows, but he would also like wider recognition for the role sheep classers and experienced breeders play in the industry.

With the debate continuing among traditional breeders over the worth of Australian Sheep Breeding Values versus the classer and bloodline-based system, the master breeder and his family this week returned to be victors in Hamilton’s sheep show rings after a 25-year break.

Fresh after taking out the National Pairs title at the Australian Sheep and Wool Show last month, the stud took out the inaugural Supreme Merino Ewe of Australia award with its champion superfine ewe at Hamilton’s Sheepvention show.

The ewe’s partner in the winning National Pairs was sashed grand champion fine wool and supreme Merino ram of the show at Hamilton. The stud also showed the grand champion ultra-fine ram.

The breeder believes the showing of sheep is the highest benchmark in the industry, with greater transparency than the on-property owner sampling and weighing of sheep for the Australian Sheep Breeding Value-based systems. He saw little relationship between ASBVs and Merino bloodlines, the knowledge of which he has used to improve his flock and stay on top of the show game for decades.

He said he was one of the first breeders to micron test and weigh fleeces, “to back up what we can see.”

“We use as much science as we can, but I refuse to use Australian Sheep Breeding Values – it is too owner-friendly for me.”

“We’ve never seen a supreme champion of any show bred straight on figures.”

Mr Crawford would like to see more training and speakers on stockmanship and sheep classing principles, including understanding Merino bloodlines, sheep structure and wool qualities and their relationship to different environments.

“You’ve hit the nail right on the head.

“What frustrates me the most is that whenever the scientific mob have a big field day, they never ever ask an experienced breeder or classer to speak,” he said.

The recent Lambex, Best Wool Best Lamb and SheepCRC conferences did not have a speaker that focussed on sheep classing and bloodlines.

“I would to set up a course with the better stud breeders to show the young people how you can look at ASBVs and classing to get that balance, so they can really understand it.

“Ninety per cent of people don’t understand what bloodlines are competitive, why they are bred for different states and environments, that’s all lost,” Mr Crawford said.

Stud breeders use science to back their “art”

Mr Crawford said top stud breeders use science to back their “art” – sheep breeding and classing — to improve their flocks.

“I reckon the scientists are always two to three generations behind us – they are catching up on what we have already done.”

Mr Crawford said “in our breed of sheep” breeders had increased the liveweight by about 35-40 kilograms in 15 years, lifted wool cut by two kilograms and dropped a micron in mean fibre diameter under good feed conditions.

He was concerned that “figure breeding” was leading the Merino too far down the meat path and flocks would lose wool quality, as in South Africa.