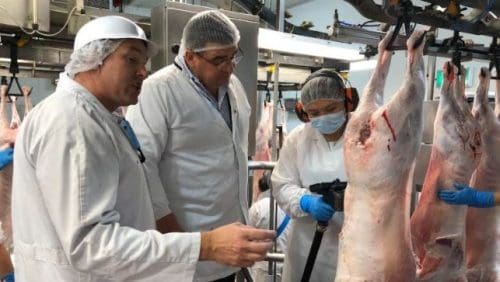 GMP CEO Will Barton, with MLA managing director Jason Strong watch the MEQ Probe being used by an operator at the Gundagai plant.

LAMB producers have been paid an extra $300,000 on the Gundagai Meat Processors intramuscular fat grid over the past 12 months.

MEQ Probe achieved world-first AUS-MEAT accreditation for the measurement of intramuscular fat in lamb last year and for beef marbling in February this year.

The GMP grid pays farmers a premium for lamb carcases that score 5 percent or higher on their IMF readings.

GMP chief executive officer Will Barton was not prepared to state the average premium paid for lambs with 5pc-plus IMF nor the number of lambs.

“We will make this data available after another 12 months of trading – it’s too early to provide a single (average) figure on a per head basis as the range is quite broad.

“The average is not a meaningful measure after just one year as the lambs we bought in the first two months are profoundly different to the lambs we have purchased in the last two months,” he said.

Mr Barton said the number of lambs consigned with IMF at 5pc-plus was increasing.

“Yes – we still have lower weeks; however, we are experiencing quarter on quarter improvement in the number of lambs above 5pc IMF.”

Mr Barton said the number of high IMF lambs being consigned was increasing, mainly due to better preparation of lambs by some producers.

“While our producers may be more focused on genetic selection, this will not materialise in the short term.

“The majority of our progress is currently based on producers sending us the lambs best suited to our grids and those producers whose lambs do not perform well on our grid are choosing to market their lambs through channels which cannot measure IMF and/or LMY (lean meat yield),” he said.

In August 2021, IMF become part of Australia’s AUS-MEAT language as a key indicator of lamb quality and in October, MEQ Probe’s technology was also commercially accredited by the Australian Meat Industry Language and Standards (AMILS) committee for its accurate measurement of lamb IMF. It is currently the only industry-accredited hot measure technology for lamb IMF in the world.

The landmark accreditation enabled GMP to create premium price offerings under their Gundagai Lamb brand – GLQ Score Graded and GLQ 5+ Score Graded. The branded lamb is being sold in the United States and domestically, including through the Mornington Peninsula Farmhouse, Tedesca Osteria, and Stokehouse Restaurant. GMP has predicted a high revenue increase for the financial year 2022 as a result of these new offerings. 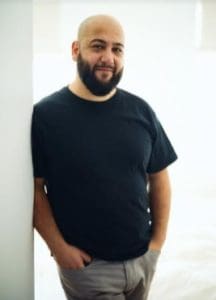 The two companies have also created a producer portal app that provides farmers with access to the readings of their GMP-processed mobs. The information supplied via the app provides insights on how farmers can improve or maintain their quality meat score and helps benchmark their lamb for the best economic return.

“It pinpoints what aspects of the management of each mob affected its carcase performance and we endeavour to have every lamb hit the optimum specifications,” he said.

Mr Cavanagh said he also uses the data to gauge the effect of the environment on the carcase with each season change. The app also provides real-time information on potential health issues of his lambs, helping him fine-tune his animal health program.

Mr Barton said the farmers’ responses to the app have been overwhelmingly positive with the speed with which insights are fed back, a particular highlight.

“The ability to grade our lamb has cracked open the market for GMP because we can now actively advertise the quality of our lamb.

“It has put us ahead of our competition, and the industry and that’s thanks to the incredible level of trust and collaboration we share with MEQ Probe,” he said.

“I think we have only achieved five per cent of what we are jointly capable of, and just that five per cent has yielded an incredible net positive for GMP.

“We’re excited about what the future of our partnership will bring.”

MEQ Probe is currently expanding what their vanguard technology can test for on a carcase level and has been testing for nutritional value and sustainability measures at GMP’s plant.

MEQ Probe chief executive officer Remo Carbone said in a time where Australia is facing very changeable weather conditions and compromised food security, it is good to know that the company’s technology has gone some way in increasing earnings for farmers and helped provide a way for the lamb industry to confirm and demonstrate quality.

“GMP has been a steadfast collaborator in this regard and our seamless integration into their processing plant has led to great technological advancement for the probe.

“Our team looks forward to our continued collaboration and to further broadening what might be possible in this arena.”