AS the daughter of one of the most prominent – and arguably influential – red meat industry leaders seen over the past 30 years, Melissa Fletcher has big shoes to fill.

The chief executive officer of her family’s Fletcher International processing business, Melissa has just joined the board of the Australian Meat Processor Corporation, taking up where her father Roger left off, since he started pulling-back from industry affairs in recent times. 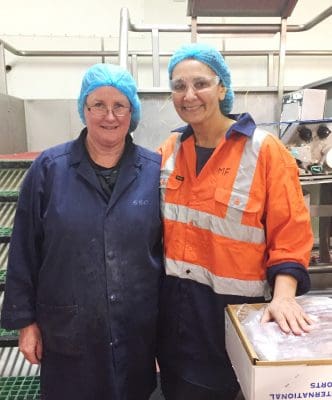 Melissa represents a new generation of red meat industry leaders, breaking down some of the stereotypes that have characterised industry representation in the past.

Both as a woman, and as an Australian of proud aboriginal descent, she brings a unique perspective following her recent election as a processor director on AMPC, the rural research and development corporation supporting the red meat processing industry throughout Australia.

She received enthusiastic support for her nomination from all levels of AMPC membership, and in fact was the first director elected this year.

While this is Melissa’s debut in terms of industry representation, she has already made an indelible mark on the Fletcher family business at the operations level, despite the formidable shadow of her father.

As CEO of Fletcher International, she runs one of Australia’s largest sheepmeat processing businesses, with production sites at Dubbo, NSW and Albany, WA. With the recent history of strong lamb and wool prices driving flock rebuilding, Fletchers is gearing itself for further growth, with investment in its facilities.

While Roger Fletcher still works in the business daily, his contribution is now more strategic, focussed on vertical integration throughout the business, including the Fletcher International Train and Grain Terminal.

The business remains a true ‘family operation,’ with Melissa calling the shots on the day-to-day processing operations, her brother Farron across the sheep and grain farms, and sister Pamela living and working at the second plant in Albany.

At the tender age of 22, Melissa was sent to WA in 1998 to commission and manage Fletcher International’s new Albany sheepmeat processing business. Despite the size of that task, she had had three children and managed to lead a reasonably ‘normal’ family life along the way. She left to start and run her own business for a few years, before rejoining the family’s Dubbo operations two years ago.

Since then she has been the key driver of a major restructure within the Fletchers’ business, as it has moved gradually from being a processor of frozen mutton carcases, to embracing chilled lamb, which now represents around half of the overall business.

Melissa has presided over the cultural, as well as physical changes necessary to allow that to happen. Some say that along the way, she has revolutionised the Fletcher International business.

Since the age of three of four, she has been her father, Roger’s shadow around the plant, and forged a solid working relationship with him at a young age. There were not many parts of the factory that she had not worked in by her late teens.

Cultural, as well as operational changes

The big demand shift from frozen mutton to chilled lamb had brought with it the need for a lot of cultural and operational changes within the Fletchers International business, Melissa told Beef Central.

“The business is a lot more challenging now, for a variety of reasons, since the shift to more high quality chilled lamb,” she said.

“Fletchers will always be a producer of both mutton and lamb, but the push into chilled lamb has been a big driver of how our business has changed. Producing a perishable product that may have to be shipped to the other side of the world not only presents challenges in areas like plant hygiene and microbial management, but also fostered a big move into boneless and bone-in cuts, as opposed to the traditional frozen carcase trade in mutton,” she said.

Retail-ready packaging of chilled lamb has also added complexity to the business.

While the trend towards quality had been happening in the past five or six years, it had in fact gathered pace since about 2015, Melissa said.

“With that, the entire business has had to change – from workplace culture, procedural matters, flexibility and skills-sets within the workforce, and the capacity of equipment,” she said.

“But the biggest change is cultural. Everybody through the chain needs to understand and appreciate the challenges of dealing with a perishable product like lamb. Making sure we have the right people heading-up each little team is critically important.”

“I’m a big supporter of training and upskilling, and we have done a lot of it within the workforce at Dubbo and Albany, as we have shifted more emphasis from frozen mutton to chilled lamb,” she said.

“We think our culture has changed a lot, as the business has grown and diversified.”

As a rare, if not unique female chief executive working in the bigger end of the Australian meat processing industry, has she been treated differently than a male CEO might have been?

“Have I had unique challenges?” she pondered. “Perhaps at first engagement, some people have not known how to take me,” she told Beef Central.

“However those that have worked with me know me, and treat me no differently than if I was a male,” she said. “But if anything, the ‘hard-core boys club’ mentality just gives me a giggle, until they get to know me.”

She said the workplace ‘culture’ issue had been different at the company’s two plants in WA and NSW.

“Because Albany was a greenfield site, which I opened, I was able to have an influence on that culture-building from day one, learning with people, shoulder-to-shoulder. But when I returned to manage Dubbo a couple of years ago, there were already entrenched mutton processing work practises in place. It was a big step to a new approach, with the encroachment of chilled lamb, but it did not take that long – the Dubbo staff quickly ‘got’ what we all needed to do,” she said.

As a result of her emphasis on ‘workplace culture’, Ms Fletcher said she still spent a lot of time on the plants’ fabrication area, side-by-side with staff.

“I’m on the floor every day, and when you’re talking restructure, as our business has, you just have to do the hard miles. I think staff have additional respect for you if you know, first-hand how the business operates. I had my first job stamping cartons when I was six or seven, and there’s not many areas of the processing plant I have not worked in since,” she said.

“My dad was the same. Everybody in the production area knew him.”

While she agreed that currently her focus was very much on the ‘production’ side of the Fletcher business, as that cultural transition into frozen/chilled and mutton/lamb is completed, she was looking forward to engaging more in other parts of the business.

“It hasn’t been possible these past two years, due to the structural changes and need to build that culture on the floor, and what direction production had to go to meet customers’ requirements,” Melissa said.

“I gave myself two years, and we’re now nearing the end of that process. We’ve just negotiated a new Enterprise Bargaining Agreement, which is completely different than anything that has been seen previously on the Dubbo site.

“I’m proud that we got the EBA through on the first vote, because the staff understood what it meant, and what it would deliver for all involved.”

“But even more than lifting productivity, these days we have to focus more on meeting both customer and importing country requirements and specifications. The new EBA is partly about the flexibility to change, according to what each individual market’s demands are. We’re great believers in multi-skilling. Set teams are not the most efficient way to approach that, when different mobs come through for different markets. Increased flexibility is a big key for what we need to do in future.”

Over time, Melissa said she hoped to be able to spend more of her own time on the marketing and export sales side of the business. “It’s the next progressive step in what we need to change to secure our future,” she said.

Time to contribute to industry

Bedding down the workplace reforms has also allowed her to take on other challenges, such as the directorship she has just picked up with AMPC as part of broader industry representation.

“Sometimes, it’s time to give some time back to the industry as a whole,” she said.

“I’m looking forward to it. I’m a passionate member of the red meat industry – and there’s a lot of challenges facing our industry and the processing sector in particular – that we can come together on to try to improve.”

Within her own ‘priority list’ were issues like export market access; finding ways for supply chains (from producers to processors) to build more consistent supply of livestock, because massive price fluctuations were damaging to all sectors; relieving regulatory burdens on processors; and industrial relations.

“Processing is a different kind of industry to most. While we are a large employer, we are heavily regionally-focused, and are high-turnover, low-margin type businesses,” she said.

“We’re (Australian red meat) in a wonderful position in terms of our international clean and green reputation, but we also have to be very careful, because we now operate in an incredibly competitive, global market.”

“Personally, I don’t think any sector – beef or sheepmeat – should get too cocky, because you never know which competitor is coming from behind. If you are doing the same thing you were last year, you’re probably doing it wrong,” she said.

“Each year, your customer wants more from you – more product information, more traceability, more food safety security, animal welfare assurances. We’re dealing with a perishable product that in many cases we’re trying to get to the other side of the world. It requires constant improvement, and we can’t take our finger off the pulse.”

Melissa Fletcher takes her place on the AMPC board early next year.